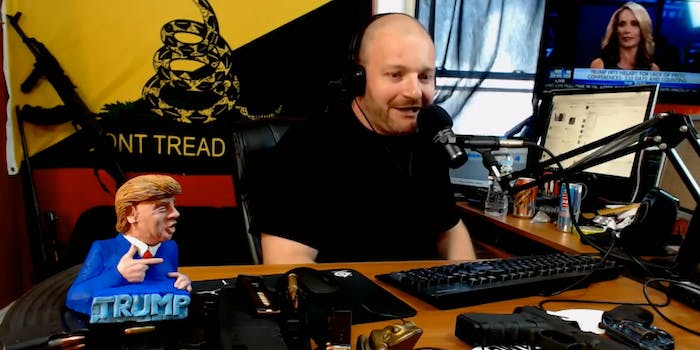 Facebook and Instagram banned the accounts of white supremacist leader Christopher Cantwell, who was prominently featured in Vice News’ documentary about the deadly Charlottesville, Virginia protests.

A Facebook spokesperson told the Associated Press that it deleted his profile page and another link connected to his podcast. Cantwell told AP that Facebook took his account down to silence him. He also said his PayPal account was banned.

“I’m not surprised by almost any of this because the whole thing we are complaining about here is that we are trying to express our views, and everybody is going through extraordinary lengths to make sure we are not heard,” Cantwell told the Associated Press. “Frankly, whatever you think of my views, that is very scary to me. Facebook and Instagram is one thing but not being able to participate in the financial system because of your political opinions is something that, you know, people should worry about in America.”

In the Vice News documentary, Cantwell shows off the multiple weapons he brought to the rally before addressing the car attack that killed a counterprotester.

“The fact that nobody on our side died, I’d go ahead and call that points for us,” Cantwell said. “The fact that none of our people killed anybody unjustly I think is a plus for us.”

Cantwell was labelled an extremist by the Southern Poverty Law Center. The white supremacist leader made headlines earlier on Wednesday for posting a tearful video blaming counterprotesters for the violence in Charlottesville.