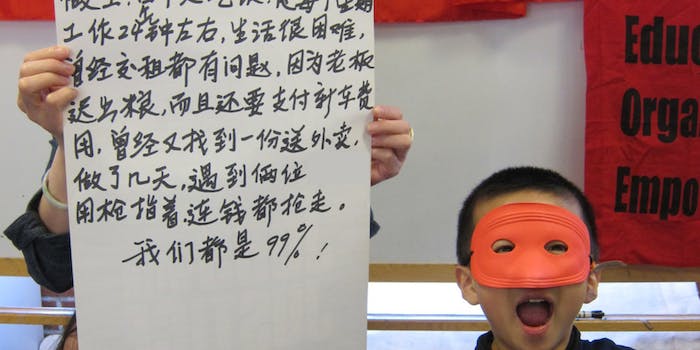 Chinese-Americans put a new face on the 99 Percent movement

Handwritten signs from the Tumblr blog We Are The 99 Percent show an increasingly diverse movement of individuals who've felt the effects of a rough U.S. economy.

Most posts on the “We Are The 99 Percent” Tumblr blog feature people holding hand-written signs in English explaining why their lives have not gone according to plan.

But recently the face of the movement has changed.

Today a small number of Chinese Americans have posted photos of themselves holding signs written in their native tongue.

Many of these people work in restaurants, are unemployed or rely on family to provide for them. They are immigrants who came to America in search of a better life.

“I am Chinese American and a mother of two. I have been unemployed since 2007,” wrote one woman according to a translation provided underneath her photo. “I am disabled from a workplace injury. I don’t receive any benefits from the government. Our family relies on my husband income to live.”

“My husband is the only one working and he has 4 mouths to feed. He works about 24 hours a week. Life is hard,” wrote another woman. “Once he found a food delivery job, after working that job for a few days, he was held up at gun point and had his wages stolen.”

Their stories are just a few in a sea of similar confessions featured on the blog. According to the site, the 99 percent are people drowning in debt, facing homelessness, working long hours for terrible pay and “getting nothing while the 1 percent is getting everything.” Each day the blog posts about a dozen photos of people sharing their stories.

It is unclear what sort of demographics make up the 99 percent but from the looks of the blog, most people are white. This is not surprising considering 71 percent of the people using Tumblr are Caucasian, according to statistics from Quantcast, a web traffic analysis tool. (According to the U.S. Census, 72 percent of Americans identified themselves as white in 2010.) And according to the Washington Post, about half of the people calling themselves the 99 percent “mention health concerns that range from cost of medication to forgoing treatment to treatment denials.”

While most of the 99 percent may be white, this small number of Chinese Americans proves how the movement is moving beyond the hipster world of Tumblr and affecting other populations.