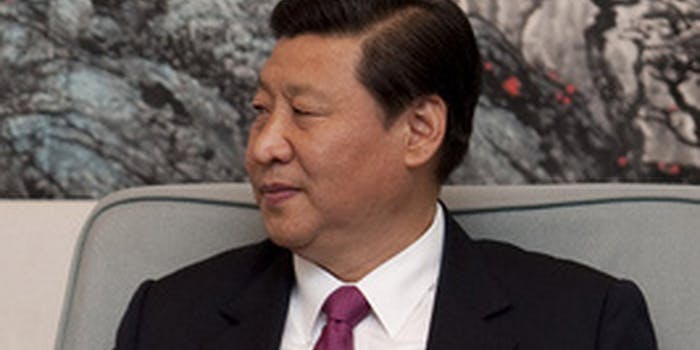 Is China’s newest leader behind this social media account?

Does Xi Jinping, head of China's communist party and likely its next president, run his own account on social media site Sina Weibo?

It looks like China’s newest leader may be taking a page from President Obama’s social media playbook. An account dedicated to communist party general secretary Xi Jinping is gobbling up followers on China’s most popular microblog service, as it spews out a stream of posts that make it sound like a propaganda platform run by overzealous Communist Party youth.

But over the past few weeks the account has revealed sensitive details about Xi’s travels, as well as private photos that suggest a very high level of access to one of the world’s most powerful men—so high, in fact, that now some Weibo users and Chinese journalists are speculating Xi himself may be behind the account.

On Sunday, The South China Morning Post reported on a spate of evidence that speaks to official involvement in the account, called the “Learning from Xi fan group.”

Earlier this month the account revealed a tantalizing stream of sensitive travel details regarding Xi’s trip to China’s southern provinces, along with up-close photos that had yet to appear in official media. In fact, official official news groups only covered the trip once it had concluded.  And Hong Kong photographers were kept at a distance.

At the same time, Xi fan group has published a steady stream of rare photographs accompanied by detailed captions. One shows him during the Cultural Revolution in the 1970s as a youth sent to work in China’s countryside. Others show him posing with his wife, Peng Liyuan, or playing soccer, or as young party cadre.

Zhang Zhian, an expert on new media from Guangzhou’s Sun Yat-sen University, noted that the photos appear to have been professionally uploaded.
They include clear, well-informed captions with details that would be hard for an ordinary Internet user to collect.
“I guess the person or the team who operates the microblog is someone with a close connection to Xi,” Zhang said.

Sina Weibo tends to scrub most mentions of the country’s leaders, so the strongest evidence the account has official backing is that it still exists at all.

But is Xi himself behind it? It’s not unusual for party officials to experiment with their personal accounts, but those who do are usually much smaller fish—mayors or local party heads. And the accounts, often verified by Sina as real, are usually explicit branches of the politician’s media outreach. There’s no direct evidence Xi has ties to the account, and certainly none he’s personally posted to the page.

Even President Obama, one of the most social media-savvy politicians in the world, leaves his accounts in control of PR professionals. Surely Xi has better things to do than praise himself on Weibo.

Photo via Chairman of the Joint Chiefs of Staff/Flickr