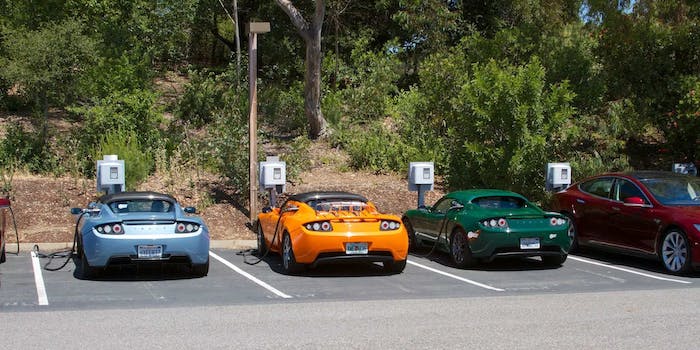 Photo via Windell Oskay/Flickr (CC BY 2.0)

Imitation may be the sincerest form of flattery, but Tesla isn’t swooning over the knockoff versions of its cars being produced by a Chinese company.

According to Wired, a China-based streaming video service called LeTV—China’s extraordinarily popular answer to Netflix—is developing a car as a side project to its primary business. LeTV’s car is said to crib heavily from the Tesla’s Model S.

Dubbed the Le*Car (the name itself is a too-close-for-comfort copy of Renault’s Le Car), the vehicle is being developed by a team of experts that LeTV poached from other automotive companies. Tony Nie, the founder of Lotus Engineering in China, has taken the lead on the project, along with a team of 600 who have worked for General Motors, BMW, and Tesla, among others.

The Le*Car is set to make its debut at the Beijing Auto Show in April—and it might not be the only entrant in the “Tesla knockoff” category.

Earlier this year, 28-year-old Chinese entrepreneur Huang Xiuyuan unveiled his own electric car project, the Youxia Ranger X. A mashup of the Tesla Model S and KITT from Knight Rider, the car has come together in just 16 months thanks to the work of Xiuyuan’s team of 50 engineers. The body and interior of the vehicle appear to be copy-and-pasted right from the Tesla playbook.

When Tesla decided to make its patents open source, its intention was to allow others to take what the company had already accomplished and build off it. Instead, the knockoffs just duplicate what has been done already.

A Telsa spokesperson told Wired: “China has shown a commitment to sustainable transportation, and Tesla is committed to helping in those efforts. We’re happy to see Model S and Tesla’s business model used as benchmarks for improvement. We opened our patents to encourage good-faith use of our technology, not to facilitate creation of Tesla knockoffs, which neither advance innovation, nor help the EV movement. And, consumers know the difference between competition and copycats.”

Elon Musk set a high bar for Tesla sales in China, expecting to sell 500,000 cars a year by 2025. A decade out from the finish line, Tesla has its work cut out for it; the company sold just 3,500 cars in the country over the course of 2014. Now the biggest obstacle in capturing that market may be its own designs in the hands of others.