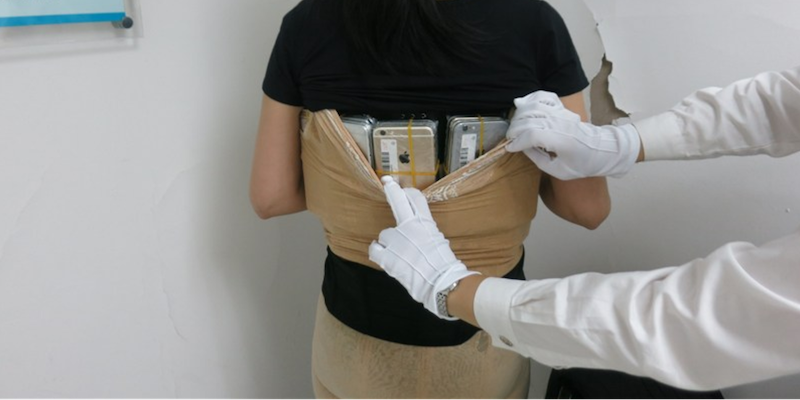 Customs officials caught a woman with 102 iPhones strapped to her body as she was attempting to smuggle goods from Hong Kong to mainland China.

Why anyone would want to wear a suit of smartphones comes down to the variations in price for different markets. Because of taxes and fees, Apple products cost substantially more in mainland China than they do in Hong Kong, so each of the woman’s phones gained value the moment she crossed the border. It’s a quick (and illegal) way to turn a profit.

Local press nicknamed the woman the “female Iron Man” and say she was caught by authorities when they saw bulges around her body. Their suspicions mounted when they noticed the woman wearing heavy clothing on a hot day, and her torso seemed out of proportion to her slender frame, according to XMNN. You can also imagine what happened when she strolled through the metal detectors.

When police took a closer look they discovered a circle of at least four layers of mobile phones. Underneath her clothing were more than 100 iPhones and 15 luxury watches, all weighing in at 44 pounds. It’s not clear which models she was attempting to smuggle, but images obtained by local news show a mix of iPhone 6 and iPhone 6s. We estimated the value of the phones to be around $80,000 using the price of an iPhone 6s at “Fortress,” one of Hong Kong’s large Best Buy-like electronics megastores.

It turns out this isn’t even the biggest iPhone smuggling bust in China. In 2015, a man was arrested attempting to smuggle 146 iPhones from Hong Kong to the mainland. A few months prior, a man attempted the same route with 94 Apple smartphones bundled around his body.