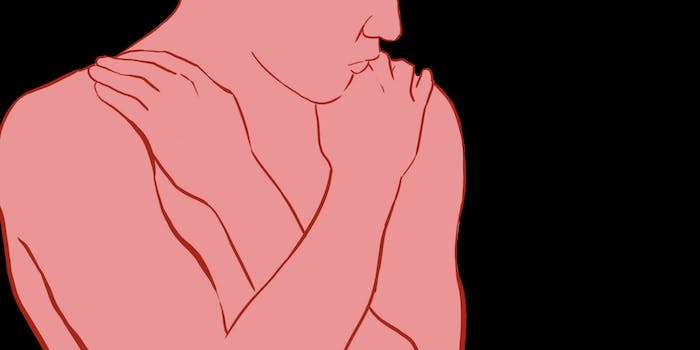 The strange and terrible Facebook-trending murder of Rebecca Cade

Does anyone actually care when low-income women and sex workers are killed?

The body draped over the fence was so bruised and mangled, passerby thought it was a Halloween decoration.

On Wednesday, police identified the body as that of Rebecca Cade, a 31-year-old resident of Chillicothe, Ohio. The story percolated through the online noise to become a top trending topic on Facebook, spreading Cade’s death to untold millions of people.

While the eerie tale of Cade’s hanging corpse intrigued Facebook users, there were other oddities that slipped beneath the surface.

For starters, Cade is the seventh Chillicothe woman found dead or missing in the past 16 months—a staggering number for a town of just 21,000 residents. Then there’s the media coverage of Cade’s murder. As news spread of the grisly discovery, websites across the nation used Cade’s own mugshot from a previous arrest to illustrate articles about her death—a confusing and ethically murky editorial decision that strikes at the heart of why women like Cade become victims at all. Cade’s mugshot was used far more than any other photo

Police quickly made an arrest for Cade’s murder. Donnie Couchenuer Jr., 27, was charged with murder and is currently in jail awaiting trial. But it was Cade’s mugshot that dotted the digital landscape all week long. Why?

According to experts, Cade’s troubled history speaks a thousand words.

A profile of Cade that ran in the Columbus Dispatch on Wednesday reported that she was a drug addict and the mother of a 15-month-old baby, born with severe fetal alcohol syndrome, who was being raised by Cade’s sister, Denise Hughes.

“Rebecca didn’t deserve that, what happened to her,” Hughes told the Dispatch. “She was always running the streets and always doing the drugs, but she had people who loved her.”

“I picked prostitutes because I thought I could kill as many of them as I wanted without getting caught.”

According to Chillicothe Police Chief Keith Washburn, Cade’s death is being considered a separate case with no links to the other six women. In an email to the Daily Dot, Washburn said that three of the victims were suspected of having engaged in prostitution but that Cade had no record of prostitution arrests or convictions.

There remains, however, a thread running through all of the deaths that calls to mind countless other unsolved murder sprees in the U.S.—the victims were women struggling with poverty, most of whom had drug problems, and many of whom also did sex work to survive.

The one stark difference about Cade’s death is that police found and charged someone for her murder. The six other cases remain unsolved. And it’s vital to note that Chillicothe is a less than a two-hour drive from Charleston, West Virginia, where a sex worker took out serial killer Neal Falls with his own gun during his attempt on her life this July. Police in Chillicothe have stated that Falls was a potential suspect in the six unsolved cases there.

For some in the small city, the murders no longer come as a surprise. On Twitter, Chillicothe residents remarked dryly about the discovery of yet another woman’s body.

The only thing to do in Chillicothe anymore is get murdered

Another body found in Chillicothe what's new though.

Savannah Sly, president of SWOP-USA (Sex Workers Outreach Project), told the Daily Dot that the Chillicothe cases, and the way that Cade’s mugshot was used to illustrate reports of her victimization, are sadly typical of the way such deaths are handled.

“The common thread of a lot of these murders is that these are people who are vulnerable already due to economic circumstance or drug addiction,” Sly told the Daily Dot in a phone interview. “Because they weren’t privileged upper-class women, perhaps the investigations weren’t done as thoroughly. And often relatives of people like that don’t have the resources to get the word out, and society is not as indignant about it.”

Sly recalled the case of Gary Ridgway, the “Green River Killer.” For years, sex workers and community members pressured law enforcement to find the serial killer responsible for countless murders of young women in the Pacific Northwest. But it took police two decades to arrest him.

Ridgway eventually confessed to murdering over 80 young women throughout the 1980’s and 1990’s.

“I also picked prostitutes as victims because they were easy to pick up without being noticed,” Mr. Ridgway said in a statement published by the New York Times in 2011. (The report was about the unrelated murders of eight sex workers in Long Island.) “I knew they would not be reported missing right away and might never be reported missing. I picked prostitutes because I thought I could kill as many of them as I wanted without getting caught.”

Serial killers like Ridgway, Falls, Joel Rifkin, and likely others who have yet to be caught, have long targeted sex workers because they believed that society thought of the women as disposable and unwanted—a trend that dates all the way back to Jack the Ripper, who killed mostly prostitutes in 19th century London. So what does it say when the media uses women’s mugshots when they are victims, not perpetrators?

Sly recalled the 2014 murders of Tjhisha Ball and Angelia Mangum, two black teenagers who danced at a Florida strip club. Local news reports used mugshots of the two girls to report their deaths, and protests online led to many of the photos being replaced with the kinds of normal selfies that can be found in any teen’s phone. 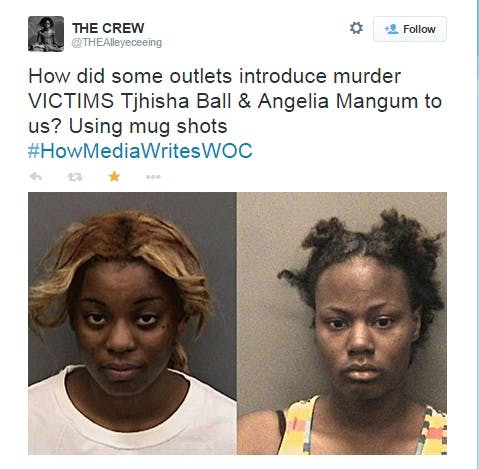 “Using a victim’s mugshot is disrespectful and dehumanizing,” said Sly. “It’s not showing her as a full person with a family and a history. It’s like saying, ‘This social pariah had something awful happen to them.’”

Sly also pointed out that women who do sex work are often cast solely as “hookers” “prostitutes” in the press coverage of their deaths, disregarding the other elements of their lives—children, family, school, or even other jobs aside from sex work.

“We think of them existing in a stasis, in a sliver of time, but sex work is actually a transitory occupation,” Sly said. “Career sex workers are more the minority, in my personal experience. It’s more often people who turn to sex work to get a need met: They’re in between jobs, they need money right now.”

Advocates for sex workers are currently struggling to combat law enforcement shutdowns of sex work client screening websites like MyRedBook.com and Rentboy.com, sites they say make doing sex work safer and less likely to result in potential violence at the hands of predators who tend to target them.

In July, the Sacramento chapter of SWOP released a yearlong study that showed an increase in street-based sex work and violence after the Fedearl Bureau of Investigation shut down MyRedBook. Now, the sex-worker community is nervously watching as police, politicians, and newly formed anti-trafficking campaigns put the pressure on classifieds site Backpage.com.

“Sex workers will share information to each other about bad actors, but we won’t go to the police, because a lot of violence comes from the hands of police, and we’re so easily extortable,” Sly said. “Being able to screen your clients through a website like Backpage is vital. If Backpage goes away, things are going to get way more dangerous for sex workers. Way more dangerous.”

Illustration by Tiffany Pai for the Daily Dot