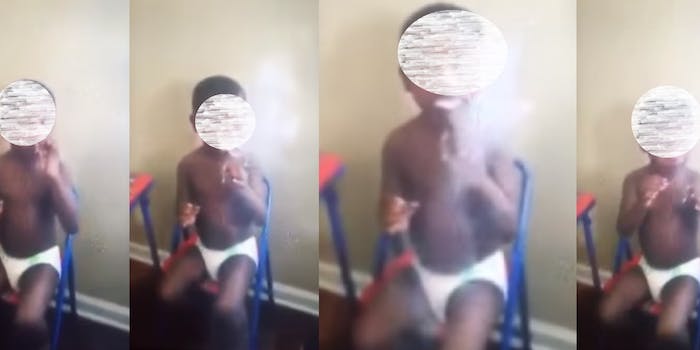 The man behind the camera appears to instruct the child how to inhale.

This article contains material that might be upsetting to readers.

Chicago police are investigating a video that appears to show a man teaching a toddler how to smoke a joint.

The man, off camera, tells the toddler to “Inhale it, do this,” and makes a loud inhalation noise. He then says, “Let me hit that, OK?”

Community activist Andrew Holmes was recognized on the street by a woman who’d come across the video on Facebook. She allowed him to record the video from her phone, and since she wasn’t comfortable going to the authorities with the video, Holmes notified Chicago police.

The Chicago Special Victims Unit is now looking into the case, as the IP address used to upload the video appears to have come from nearby. At this time, no details have been released on the page the video was posted to, or as to whether the video was originally uploaded to Facebook or stolen from YouTube or another video hosting platform.

As far as marijuana laws go in Chicago, Illinois has one of the country’s strictest medical marijuana programs—which is currently still in pilot testing. The law makes it quite clear that toddlers are not allowed to be taught by an adult—even if they’re holding one of the medical marijuana licenses—how to properly hit a J.

This incident joins a few similar ones over the past few years, including a mother teaching her toddler how to use a bong, a video posted to Vine showing a child smoking a joint, and a 2-year-old who traded a 40-cigarette-a-day habit for a massive junk food habit.