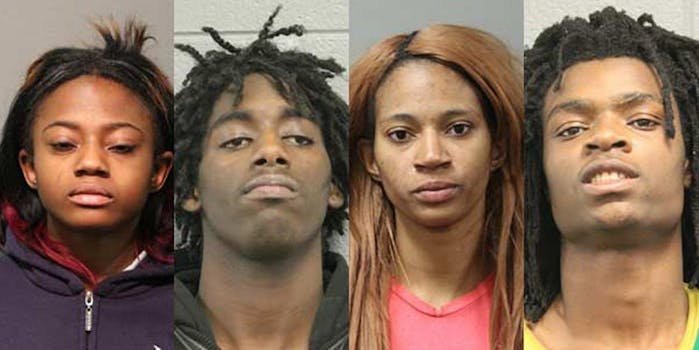 Hate crime charges were filed because of the victim's disabilities, not because of any racial motives.

Chicago police have charged four suspects with a hate crime for allegedly beating and torturing a student with mental disabilities.

A half-hour video, which went viral on social media Wednesday, appears to show the four teens taunting and torturing the 18-year-old victim, who has not been identified by police but was described as an adult man with “mental health challenges.”

The video shows two men punching and slapping the victim, who had been tied up and gagged in a corner. At one point, an assailant appears to use a knife to carve into the man’s scalp. The victim is also seen being kicked in the head, slashed with knives, and forced to drink from a toilet.

In the background of the video, a person can be heard repeatedly yelling, “Fuck Trump!” and “Fuck white people!”

Chicago police later found the victim, who was reportedly held against his will for up to 48 hours, in Chicago’s Homan Square neighborhood. The video was discovered by police after they learned he had been reported missing.

A police spokesperson said the four suspects, who are black, were being charged with a hate crime because of the victim’s disabilities, not because of the racial epithets shouted by the suspects in the video. The victim is white.

Police Superintendent Eddie Johnson, a 28-year veteran of the force, said the video was “sickening.”

“It makes you wonder what would make individuals treat somebody like that,” he said.

Addressing the video Thursday afternoon, White House press secretary Josh Earnest said the video demonstrated “a level of depravity that is [an] outrage to a lot of Americans.”