A chess app can let anyone win.

When given the opportunity to use a computer to play chess, anyone can be a winner. But when a grandmaster himself cheats using a connected device at a high-profile chess match, it rocks the chess world and raises questions of just how many people might actually be juicing their gameplay with a smartphone.

Georgian Gaioz Nigalidze was kicked out of the Dubai Open Chess Tournament this week after he was caught cheating with an iPhone. Apparently 25-year-old Nigalidze was taking trips to the bathroom after each move, and after his opponent complained, officials found a device and a headset covered in toilet paper hidden behind the toilet, the Washington Post reports.

Nigalidze predictably said the iPhone wasn’t his, but the device was logged in to a social network belonging to Nigalidze. The iPhone was also running a chess app, with a full history of all the moves. Officials compared it to the paper record of the game, and found he’d been cheating the whole time. 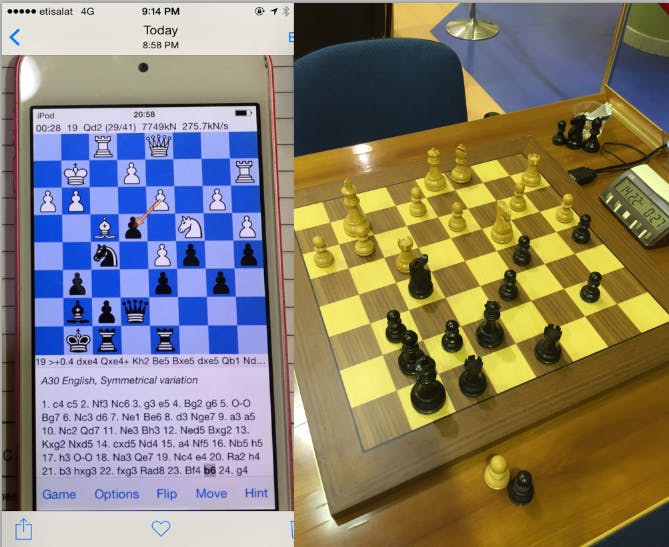 This isn’t the first time players have been caught cheating, but Nigalidze’s cheating scandal comes just a few short weeks after Daniel Gormally, a British chess grandmaster, claimed that a rising number of people are going to the bathroom and using smart devices to help them advance in chess matches.

Dubai’s chess tournament has seen its own share of cheating. An Iranian player was caught using a cell phone in 2008—a friend watched the match live and texted the player updates, Dubai Chess reports.

As technology becomes more pervasive and easily hidden, chess officials will need to be hyperaware of what players are doing and distribute harsh penalties for players who break the rules—and perhaps post security outside the toilet to make sure anyone isn’t taking one too many unwarranted trips.