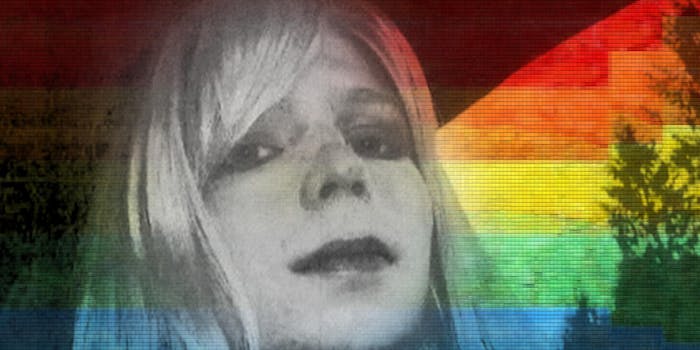 The rejection has gone on long enough.

In a repeat of last year’s controversy, an LGBT organization is speaking out against Chelsea Manning, after she was named honorary grand marshal in the 2014 San Francisco Pride parade. Military LGBT activists were reportedly “astounded” and have gone public, again, to complain about the decision.

Manning was also honorary grand marshal last year, but the title was eventually revoked, which led to an angry protest. Gary Virginia, the parade organizer, told the Associated Press that the decision was mishandled, after issuing an apology. Manning responded appreciatively from prison, acknowledging the Pride movement’s role in “bringing together diverse communities and elevating the public profile of the fight for queer rights.”

The American Military Partner Association (AMPA), an organization that advocates for same-sex military families, decried Pride’s announcement, telling reporters that Manning’s actions don’t reflect other LGBT people in uniform. As if the actions of any one person should ever be a reflection on the character of total strangers.

Considering the media’s widespread disrespect for Manning’s gender orientation, it’s time for the AMPA to put politics aside, and give Manning the support she deserves.

A transgender woman and former U.S. Army private, Manning is currently serving a 35-year sentence at Ft. Leavenworth for leaking U.S. secrets to WikiLeaks. Following her sentencing in August 2013, Manning drew widespread attention to the way transgender people are depicted in the media, after revealing her sexual orientation to the world.

“I am Chelsea Manning. I am a female,” the minute 25-year-old prisoner, formerly known as Bradley, informed the world immediately after her sentencing. “Given the way that I feel, and have felt since childhood, I want to begin hormone therapy as soon as possible.”

A number of prominent news organizations, including the New York Times, CNN and the Washington Post failed to abide by Manning’s wishes, even as they reported them.

“Stop calling her Bradley Manning,” the Daily Dot’s Aja Romano responded. “Bradley Manning is now Chelsea Manning. She will be referred to as ‘she.’ She made this clear. This isn’t difficult.” This sentiment was echoed by others in the press as well, frustrated at the awkward handling of Manning’s identity by the majority of big media companies. Granted, she was the first openly trans woman the U.S. Army housed at Leavenworth, but even that poor excuse ends with the prison’s staff. The media debate itself was unnecessarily convoluted overall and mostly born of prejudice.

Not long after the sentencing, Fox News aired a segment on Manning’s identity that featured their host jamming out to Aerosmith’s “Dude (Looks Like A Lady).” While invoking the name Bradley Manning, a reporter for the National Review referred to her sexual orientation—all transgender people, in fact—as fictitious, a “fantasy,” even using the phrase “legendary creature.” NPR initially rejected the use of female pronouns as well, telling their readers that some type of medical procedure was first required: “Until Bradley Manning’s desire to have his gender changed actually physically happens, we will be using male-related pronouns to identify him.”

This type of coverage, aired internationally throughout the month of August 2013, was abusive and degrading to Manning and the LGBT community at large. All the public debate over this one specific person’s gender identity was missing was an inappropriate prison sex joke. CNN was more than happy to oblige: “If he wants to be Chelsea, he can practice all he wants at Fort Leavenworth, cause those guys are there for a long time,” said a panelist, who was also an attorney, live on air. Fredricka Whitfield, the show’s host, didn’t even flinch.

Manning’s politics should be footnote when her role as an LGBT figure is the focus of the conversation. She has suffered vicious attacks and public humiliation, on television, in print, and online, solely because she came forward as transgender, without any regards to her politics. Some of the biggest press organizations in the world eventually honored her wishes and widely circulated statements clarifying their language, which is to say, they now approach the issue of sexual orientation with a greater degree of certainty—and hopefully so will their readers.

As a member of the LGBT community, Manning’s right to publicly embrace her own sexual orientation has been repeatedily questioned, broadcast inside of the homes of millions of people, with little or no respect given. Ignoring how the media treated Manning after coming out as a woman, focusing solely on her politics or opinions, is another way of robbing her of her identity.

Yeah, SF Pride should throw Chelsea Manning a parade. And AMPA should build her a statue.

Photo via qthomasbower/Flickr (CC BY 2.0) | Remix by Fernando Alfonso III