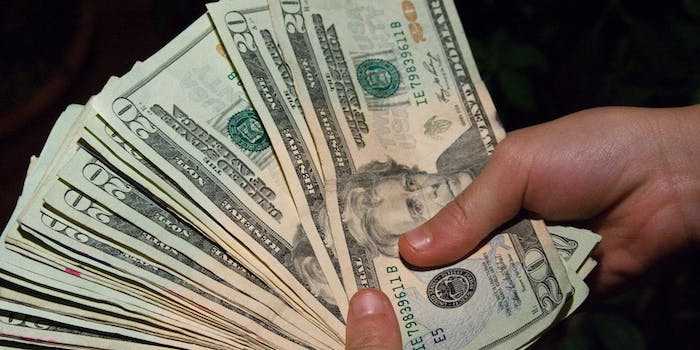 Thanks for the cash, ISIS. See ya.

A group of young women in Chechnya got in a bit of trouble with local police after they used social networks to catfish the terrorist organization Islamic State (ISIS) out of thousands of dollars.

According to an RT report, three young women had participated in a scheme to create fake profiles and convince ISIS recruiters that they wanted to travel to Syria and join the fight. Once recruiters were hooked, reported RT and local Chechen news outlets, the women asked them to wire travel money. About $3,300 was sent to encourage the women to travel. After the money arrived, they scrubbed all evidence of the profiles and disappeared.

“I don’t recall any precedent like this one in Chechnya, probably because nobody digs deep enough in that direction,” said police spokesperson Valery Zolotaryov, whose “E Unit” investigates online crimes, in an interview with the Moskovsky Komsomolets newspaper. “Anyhow, I don’t advise anyone to communicate with dangerous criminals, especially for grabbing quick money.”

Russia’s Life News interviewed one of the women on camera under the caveat that her face be blurred. “Maryam” told the reporters that she had been contacted first by a Syrian member of Islamic State, followed by two other militants. She considered taking the offer to join the fighters, but she chose not to after speaking with friends.

“Many people I know did go,” said Maryam in the Life News interview. “But I know no one for whom it turned out well.”

The terrorist group frequently recruits fighters from the Muslim-majority Chechen area. In March, Islamic State militant Mukhammad Abu Barud al-Dagestani wrote a guide to joining the group and published it in Cyrillic script on the Russian social network VKontakte.

The guide came about a week after a Chechen, a Tajik, and several Russians were discovered trying to cross the border into Syria from Turkey, reported the Moscow Times. Most of the guide’s advice centered on how to cross the border and join ISIS without getting caught.