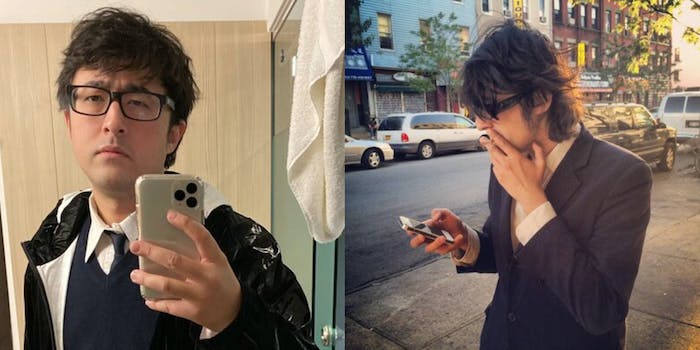 'He f*cked with my head at a very young age.'

A 24-year-old Twitter user accused Virgil Texas, of Chapo Trap House fame, of engaging in an inappropriate relationship with her when she was a minor.

The Twitter user, who joined the platform in June under the name Jennifer Seberg, made the allegations against Texas on Wednesday. Texas is an ex-host of popular leftist podcast Chapo Trap House and current host of Bad Faith, a podcast he co-hosts alongside Briahna Joy Gray, the former press secretary for Sen. Bernie Sanders’ 2020 presidential campaign.

Rumors that Texas dated a teenager have been circulating online for a while. In April, Twitter user @MenshevikM tweeted, “Did the rumors about him dating an underage girl get him in trouble. why are all his close friends being so tight lipped about it.”

On May 19, Chapo Trap House released a statement saying Texas was departing from the podcast “in order to pursue other creative projects.” He spent four years at the company as a co-host, co-producer, and collaborator.

According to Seberg, Texas’ alleged abuse began years ago.

“When I was a teenager, I thought Virgil Texas was very funny,” Seberg tweeted, beginning her thread. “I asked him to proofread an essay I submitted to a website, and emailed it to him. The essay was about turning 16. We talked a little bit, and I thought he was very cool because he was funny and he lived in NY.”

After talking, Seberg said she and Texas exchanged phone numbers and texted late at night when she was alone in her bedroom. She said they eventually began FaceTiming and talked often about his alleged girlfriend at the time, Marie Calloway.

After Calloway left the picture, the FaceTimes increased, Seberg said in the thread.

“I believed that we were in a long distance, adult relationship as he requested things of that nature from me,” she alleged.

Seberg didn’t want to give explicit details of what all happened during those FaceTime calls, but she said “I think you get the idea and it was traumatizing for me for many years.”

After Texas allegedly “lost interest” in her, Seberg said she went to college, where she began to realize how abnormal their alleged relationship was and its negative toll on her emotional health.

“He fucked with my head at a very young age, and now, I realize that even though he is much more successful now than he was when I met him, that it’s still disgusting,” she said before adding in another post that she “refuse(s) to excuse him for his abuse of me.”

She said she came forward with her story after the Daily Caller inquired about their “relationship” and after she saw Texas sharing a platform with people like Gray, Rep. Alexandria Ocasio-Cortez (D-N.Y.), and Chelsea Manning.

“I was terrified for weeks, and felt disgusting because an awful publication was talking to me about my trauma to monetize it,” she said of the Daily Caller reaching out before commenting on Texas’ appearances with the notable public figures. “I started feeling like anything I ever said against him would immediately label me as conservative, pro-Trump, etc.”

Seberg’s testimony was met with mixed reactions. Many users thanked Seberg for coming forward and applauded her bravery in doing so.

She ended her thread by thanking those who followed along and urged “all women in his path” to “stay incredibly cautious.”

Texas did not respond to the Daily Dot’s request for comment by the time of publication.