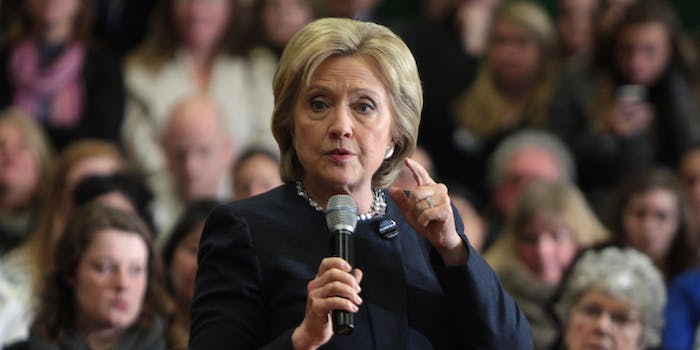 Historic petition or no, Clinton is highly unlikely to become president.

Nearly 4.7 million people have signed a Change.org petition calling on the Electoral College to vote for Hillary Clinton instead of President-elect Donald Trump, making it the largest in the site’s history.

The petition, launched on Nov. 10 by Long Beach, California, professor Daniel Brezenoff, rocketed to virality in liberal circles as Clinton’s lead in the national vote rose to more than 2.5 million votes over Trump. Celebrity Clinton supporters, including Lady Gaga, Laverne Cox, and Sia, signed the petition, helping to push its support to historic heights for Change.org.

Trump, however, leads in the vote that matters: The Electoral College, which is scheduled to cast 306 electoral votes for Trump—well above the 270 electoral votes needed to win the White House—when it meets on Dec. 19.

A number of electors have launched an internal campaign to convince fellow electors to vote for Clinton instead of Trump, even if their state chose the businessman as its victor. The controversial revolt is not expected to succeed. However, one elector, from Texas, resigned rather than vote for Trump on the grounds that a vote for him would betray his Christian faith.

The role of the Electoral College in America’s democracy has become a focal point for voters disappointed and disturbed by Trump’s election victory. On Nov. 15, Democratic California Sen. Barbara Boxer introduced legislation that would eliminate the Electoral College by amending the U.S. Constitution. The bill remains unlikely to receive traction on the Republican-controlled Congress.

Change.org—a for-profit business and not a non-profit, as the .org domain implies— was founded in 2007. Other notable petitions on the site include the March 2012 petition calling for the prosecution of Florida man George Zimmerman for the killing of unarmed 17-year-old Trayvon Martin, and a November 2013 petition asking Google to disconnect YouTube comments from Google+.