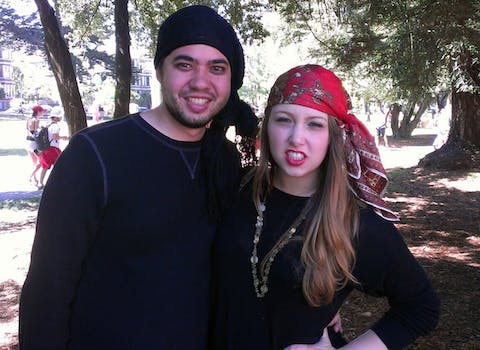 Not all treasure is silver and gold.

In California, the Pirate Party’s ranks have swelled to more than 50 members since it started late last month. Now all the group needs is about 102,954 more people to join them.

That’s the minimum number of registered members the party will need to appear on the ballot for the state and local elections in 2014. The California Pirate Party (CAPP)  has until January of that year to meet the requirement—and it’s already prepared a plan of attack.

Known mostly as a European political movement dedicated to preserving Internet values, the Pirate Party is formally represented in 29 countries and has burgeoning informal movements in dozens of other nations, including the United States. Seventeen states have independent Pirate Party chapters, though  four of those, including California, have only been around since May.

Founded in Sweden in 2006, the party was named after filesharing site The Pirate Bay. While members can take a wide range of stances on many issues, its core values are consistent: government transparency, copyright reform, citizen privacy, and an unrestricted Internet.

“We are a group of lawyers, debaters, students, activists and young professionals,” Orion Steele, vice president of CAPP, told the Daily Dot.

The California group, comprised of six founding members in San Francisco, came together after witnessing the German Pirate Party’s repeated, stunning victories in state elections. CAPP used a house in western San Francisco, just blocks from the ocean, as a temporary headquarters. (“An easy location for pirate meetings,” Steele joked.)

Having developed a platform around five core goals—“defend the Internet” is number one—CAPP’s now focused on recruitment. Getting 100,000 signatures is certainly a tall order, but the party really don’t have a choice.

While the Pirate Party has been most successful in countries like Germany and Sweden, which have “proportional representation”—where a party that wins a moderate percentage of votes in an election will win that same percentage of seats—politics in the U.S. is much different. If a third party can’t muster up enough registered party members to get on the ballot, there’s virtually no chance of winning any local elections.

“The upclimb is much, much steeper for a challenger party in this kind of environment,” Pirate Party cofounder Rick Falkvinge told the Daily Dot.

It won’t be easy. Several states, California among them, have seen Pirate Parties rise and fall, crippled by internal disagreements and lack of public support.

But that was before Pirates had such strong election results in Europe and before American Internet activists successfully united in defeating Internet legislation, such as the Stop Online Piracy and Protect IP Acts.

CAPP’s 50-odd member staff has planned all kinds of promotion in anticipation of 2014. They started by simply making themselves visible in San Francisco, where a few founding members ran a seven-mile race in pirate regalia.

But they’re getting serious, too. In July, CAPP will send a representative from San Diego to the Trans Pacific Partnership (TPP) negotiations. Steele said the CAPP, in conjunction with members of the Australian Pirate Party, will lobby delegates, informing them why Internet rights activists oppose the TPP on par with the Anti-Counterfeiting Trade Agreement (ACTA).

Come fall, the CAPP will tour college campuses around the Bay Area in hopes of inspiring students to start their own chapters of the party.

In the party’s first-ever public meeting online, secretary Constance Gordon noted that if the CAPP is successful in getting on the ballot, it would inspire potential pirates around the country.

“People I’ve talked to, even outside california, are really excited about what we’re doing,” she said. “We’d love to spread this, because we think it’s important.”