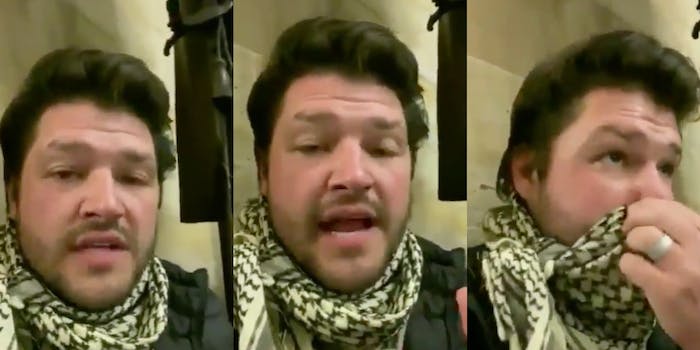 It has sparked a discussion on white supremacy in evangelical spaces.

In a recently discovered Parler video posted to Twitter, a Capitol insurrectionist who identified himself as a pastor is sparking a discussion on white supremacy in evangelical spaces. The man is being called “Pastor Parler” on social media.

Per Twitter user @RzstProgramming, the footage shows a Capitol rioter, who has been identified as Tyler Ethridge (@TylerEthridge9). Ethridge graduated from Charis Bible College and was reportedly recently hired as a youth pastor at the non-denominational Christ-Centered Church of Tampa in Dover, Florida.

In the video, he’s crouching down with a keffiyeh around his neck, which he intermittently uses to cough and wipe his face, presumably from the tear gas.

“I don’t know if what we’re doing is right,” Ethridge says. “But if the election is being stolen, what is it gonna take?”

In a video taken prior to the insurrection at the Capitol, he calls for veterans to create militias to defend their “heritage,” saying, “This is why you’re alive. If your life feels meaningless, that day is over.”

Ethridge had two Twitter accounts, one of which is now closed. However, on the other account, Ethridge is tweeting—as recently as Monday—that he has “nothing to hide” and that he’s reported himself to the FBI.

Ethridge also denied living in Florida in response to @RzstProgramming’s tweet about him.

However, he reportedly said on Facebook that he was moving from Texas to Florida to work at the Christ Centered Church of Tampa, and there’s footage of Ethridge in a sermon at the church—as well as footage of him making bigoted comments about Indian culture.

Ethridge posted a series of photos of himself traveling to Washington, D.C., and taking part in the seditious acts of Jan. 6.

And a discussion was sparked in Benbow’s replies.

“The evangelical move into politics was because of their racism,” one user alleged, linking to a Politico article that delves into the origins of the “religious right.” The article notes how many “Christian” institutions, such as Bob Jones University in South Carolina, pivoted to political “pro-life” arguments as a cover for race-based segregationist ideology.

“It wasn’t until 1979—a full six years after Roe—that evangelical leaders, at the behest of conservative activist Paul Weyrich, seized on abortion not for moral reasons, but as a rallying-cry to deny President Jimmy Carter a second term. Why? Because the anti-abortion crusade was more palatable than the religious right’s real motive: protecting segregated schools,” Randall Balmer, the Mandel family professor in the arts and sciences at Dartmouth College, wrote for Politico.

“Many still revere white supremacists, racists, confederate chaplins, and name their buildings, institutions, and programs after them,” Alex Medina, an art director and designer, said.

Another user who attended a Christian college shared a firsthand account of that claim. “I really had to tell one of my roommates that my ANCESTORS were LITERALLY slaves bc he wanted to put up a Confederate flag in our apartment common area for the sake of honoring ‘the right to statehood’ and state’s rights I said, ‘sorry sir, no,'” they wrote. “Why is this even a CONVERSATION AT A CHRISTIAN COLLEGE!?”

Many evangelicals have attempted to distance themselves from Trump following the insurrection. Critics, however, have expressed that feel the untethering is too little, too late.

“You can’t understand what happened today without wrestling with Christian Nationalism,” Andrew Whitehead, a sociologist at Indiana University-Purdue University Indianapolis, told the New York Times while noting that white evangelical movements have long been connected to far-right extremism. “They provided the political and theological underpinnings of this, and it has allowed anarchy to reign.”