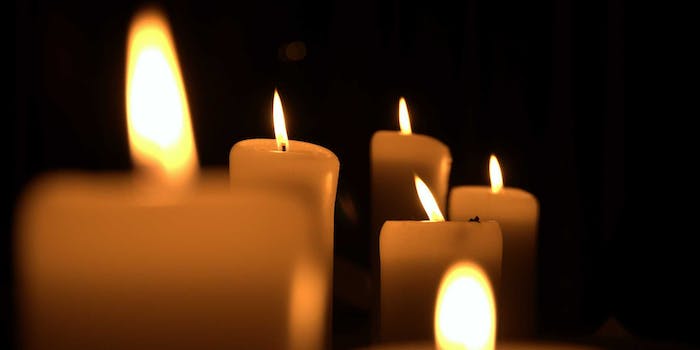 Finally, a wax candle you can light with your smartphone

They can even put themselves out if you forget.

You can already use your smartphone to turn on your living-room lights or start a movie on your television, and now you can use it to light up candles.

Candle Touch‘s smart candles aren’t some cheesy, fake LED lights. These are the real deal, and the flame is controlled remotely. Welcome to the future of mood lighting.

These smart candles—the first on the market—are made of real wax and a wick that actually burns. You can ignite them with an app that works on iOS and Android devices. The base of the candle houses a Bluetooth receiver that handles the commands. Once prompted, a pair of metal rods on either side of the wick provide the spark. “Candles are one of the oldest inventions in history that hasn’t changed at all over the course of thousands of years,” inventor Moshe Lev explained in a recent interview. “Personally, I’m a big fan of candles and I think it’s time to change the candle consumption reality. It’s time to integrate the authenticity of the candle with today’s world technological progress to get a new safe, easy to use and technologically advanced candle.”

What’s particularly cool about these futuristic candle holders is that you can remotely extinguish them too. A few taps of the app will prompt the built-in candle cover to pop into place and snuff out the flame. You can even initiate the candle shut-down feature by blowing into your smartphone microphone. When you’re dealing with fire, safety is a huge concern, but Candle Touch added a slick failsafe: The candles automatically extinguish if you leave the 30-foot Bluetooth communication sphere.

The candle holder charges through a USB cable, with each charge lasting somewhere between 55 and 70 hours, according to Candle Touch. The replaceable wax portion comes in a half dozen scents, including vanilla, lavender, and melon.

Candle Touch hasn’t yet announced a price or a release date, but the company is slated to appear at Web Summit 2015 next week in Ireland, where it could announce those details.