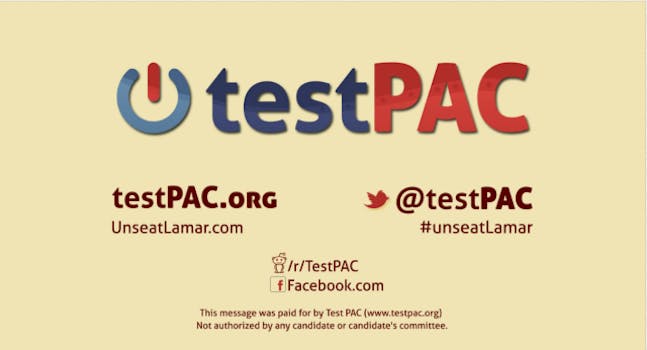 Rep. Lamar Smith started a fight with the Internet. The Internet wants to end it.

Lamar Smith took on the Internet, and now the Internet is fighting back—in Smith’s own backyard. Reddit’s political action committee, TestPAC has ratcheted up its anti-Smith campaign, releasing both a billboard and a TV ad in less than a week.

“This is an example of the internet flexing its muscles and showing that we can make political speech,” TestPAC’s treasurer Andy Posterick wrote on Reddit shortly after announcing the billboard had finally launched.

Smith, you may remember, sponsored the Stop Online Piracy Act (SOPA) in Congress, a bill that was supposed to curb online pirating. Opponents argued that many of the bill’s provisions amounted to online censorship and threatened the technical backbone of the Internet. After a Reddit-led Internet blackout, SOPA was shelved, but not before Smith tossed one more barb at his online foes, calling them little more than a “vocal minority.”

The billboard looms over route I-10 in Smith’s home district in San Antonio. The message reads “Richard M——- for Congress,” with a black censor label over the last name. Smith’s opponents in the race are Richard Mack and Richard Morgan, so it’s is a  creative way to support them both without playing a favorite. Still, the group is open to new ideas—the billboard is digital, Posterick explained on Reddit, “so we can change it at any time.”

The Internet’s muscles are really on display with the TV ad, however.

This is no schlocky piece of amateur propaganda. The video, called “Dear Mr. Smith,” combines some slick animation with some very professional voice work. It doesn’t quite lunge for the political jugular like you might expect, and certainly not like some of the virulent anti-Smith posts on Reddit do. There’s a sense of timidity, but that’s something you might expect from a first video.

And there are more to come.

Scott Bloomberg, the PAC’s lead advisor, told me the group has a second video in the works, as well as a “ground campaign,” a direct mailing campaign, “plus some other small things.”

He added, “A lot of that hinges on the fundraising response to this first ad though.” (You can donate here.)

TestPAC’s team is doing everything they can to drum-up that support, especially on Reddit, which was largely responsible for launching the PAC back in January. They’ve hit up the site’s live interview section, r/IAmA, a great place to engage with a big audience and promote your ideas. If you’re interested, head on over and ask them a question.