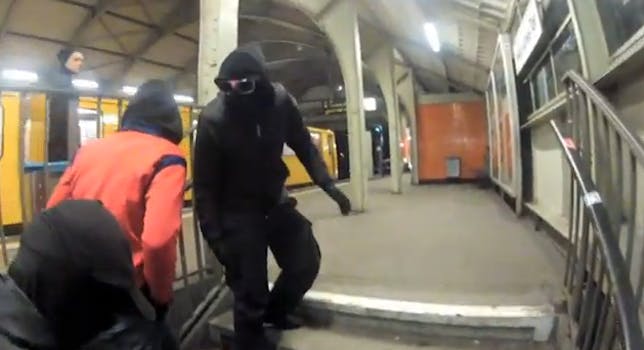 “Camover” is a game played with hammers and high tech. The rules: Smash as many cameras as you can. Activists in Berlin have brought together game theory, artistic destruction, and social media in an attempt to take “direct action” against the proliferation of public spycams, a.k.a. closed-circuit civilian monitoring, in the country.

“Camover” is a game played with hammers and high tech. The rules: Smash as many cameras as you can.

A group of citizens moves through the city, usually wearing balaclavas or other masks, sometimes in full costume, smashing all the CCTV cameras they can find, while filming their actions. They upload the video to a video sharing site (linksunten.indymedia.org is recommended) and share it with the game’s website—a trick in itself; the site is being whack-a-moled with some regularity. Alternatively, participants can email Camover to post the video for them. The number of cameras taken out is totaled and that number adjusted based on the creativity with which they are disabled, and the player receives a score.

Closed circuit television monitoring (CCTV) is already a 1984-ish way of life in Britain. For those who value privacy over “the greatest good for the greatest number,” the proliferation of public cameras is an uneasy aspect of life in the United Kingdom.

Given the politically, geographically, and intellectually porous borders of the European Union, it is unsurprising that the practice has started to take root in other countries. What is surprising is that Germany is one of them. Although the prevalent CCTV cameras in Germany are not part of an official national police system, that is the direction talk seems to be moving.

German politician Hans-Peter Friedrich has begun talking about the British method as a possible avenue to avoid bombings, like the one that almost took place in the Bonn train station in December, and egregious murders, one of which took place last October in the Alexanderplatz.

Germany has not had a felicitous relationship with state spying. From the SS to the Stasi, when the government of a German nation decides you need keeping an eye on, you have a reasonable chance of winding up in one sort of jail or another. It’s no surprise that activists are resisting the encroachment against private life by state camera systems. This being Berlin, the home of political dada, they’re doing so with a game.

Camover is a game. It has rules and a point system. But it is also performance art—with costumes and symbolic drama. And it’s dada—with extravagant public action.

In Camover, groups form, often named after a historical figure, normally one involved in rebellion, and prefaced with a military word such as “brigade” or “command” or “campaign.” This naming convention evokes the violent Leftists groups of the ’60s, ’70s and ’80s, like the “Red Army Brigade.” But usually the reference is more comical than threatening, like “Commando Black Rabbit of Death.”

And it’s documented for all to see. “We thought it would motivate inactive people out there if we made a video-invitation to this reality-game,” the game’s anonymous creator of Camover creator told the Guardian. “Although we call it a game, we are quite serious about it: our aim is to destroy as many cameras as possible and to have an influence on video surveillance in our cities.”

In the two weeks since the game has begun, participants have taken out about 50 cameras. It continues until Feb. 19, the start of the European Police Conference.

The big question is, will “players” in other countries pick up the ball? As the game gets better known, the hashtag #camover has started to gain steam. Will it gain a purchase in Britain, the U.S., even Japan?

This is a game with real-world stakes. Sitting behind a keyboard where no one can face you down, to say nothing of punching you in the throat or throwing you in a jail cell, is one thing. Climbing aboard a moving city train and destroying property, however, requires action, a movement from concept to action and from solitude to social intercourse, an intercourse fraught with misunderstanding and conflict.

If you have elected to move the Camover game onto your own court, we would love to hear about it.