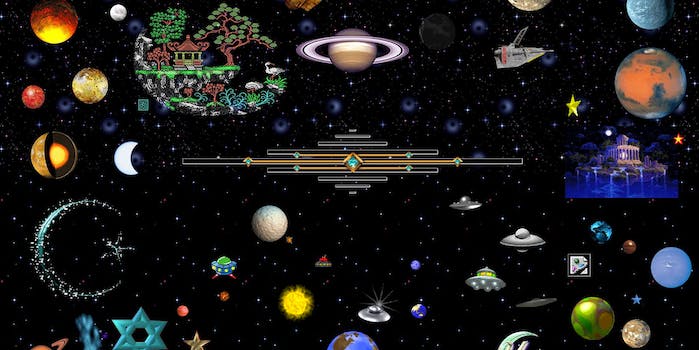 When web hosting service GeoCities was shuttered in 2009, it marked the death of over 38 million websites ranging from personal to downright weird. Those relics of the Web finally have the resting place they deserve: Cameron’s World.

The site serves as a Web collage as well as a living eulogy to the bygone era of Internet individualism that was embodied by GeoCities.

New Zealand designer Cameron Askin is the proprietor of the art project, and he’s playing the role of the Internet’s very own Dr. Frankenstein. After excavating the graves of GeoCities, he’s pieced together thousands of assets from the dead sites to create his monster.

Askin said the project started last October after he discovered the One Terabyte of Kilobyte Age project. The research blog run is run by two artists who downloaded a torrent containing the entirety of the GeoCities archive. An accompanying Tumblr account posts screenshots of home pages from the stash, processed in chronological order from oldest to newest. The most recent post was from November 1999—there’s a full decade left to go.

“I started exploring the GeoCities archives (such as OoCities) and I was really inspired by what I found,” Askin told the Daily Dot. “There’s not a whole lot of ‘nice’ (or user-friendly) Web design in there but the archives are exploding with creativity.”

GeoCities’ run from 1995 to 2009 serves as a distinct marker of an Internet era. When the hosting service started, it signaled the dawn of the mainstream Web. By 1995, 18 million American homes were online. The very first version of Internet Explorer was released along with Windows 95, which was the first version of the operating system to include built-in Internet support. Foundational pieces of the Web started to be put in place; Amazon, eBay, and Craigslist all launched the same year.

GeoCities could have been considered a part of the same class, but it burned out when the Web went the way of homogeny. Facebook had already surpassed MySpace by 2009, making a strong case for uniformity in favor of the bedazzled profiles the latter allowed for. The sites on GeoCities were deeply personal and individualistic, which just didn’t jibe with the way the Web was heading.

“These days I think a lot of internet has become a ‘mall’ in terms of our off-the-shelf conformity. It feels like the most room we have to express ourselves online is our choice of profile and cover pictures on social networks like Facebook or LinkedIn,” Askin said.

That’s why he brought back GeoCities with a site of his own. “I wanted to celebrate a simpler time,” he explained.

The conceit of GeoCities was to think of it as an online metropolis. It was a single place with very diverse communities connected by links, the web’s version of roads. The city was broken down into communities that shared a similar theme, referred to as neighborhoods.

“I would dig through these neighborhood directories and open hundreds of tabs at once (I had a nifty Chrome plugin) and would pull GIFs and interesting text out, screenshot and note URLs,” Askin explained. “Needless to say I spent a substantial amount of time on some really weird websites.”

Each site on GeoCities was a home to the creator. They could paint and decorate however they saw fit (usually with an abundance of gaudy graphics and questionable font choices) and showcase whatever obsession, skill, or belief that they wanted. The creative freedom of GeoCities made each site a distinct expression of the person that made it.

“After collecting material from thousands of these sites I dropped everything into Photoshop and grouped related GIFs and text together. I tried to capture some key themes/trends in each section. It came together quite organically,” Askin explained.

Each piece of Cameron’s World is a portal into someone else’s world, one that has been closed off from the rest of the web. There are links to the originals, which usually lead to a dead end or a Yahoo error page. A built-in browser within Cameron’s World—the Catscape browser—pops up and takes you to the archived site when it can.

Browsing Cameron’s World is like looking at hieroglyphs in a museum: someone created them and imbued them with meaning, but you’ll never fully know their true context.

Since most people’s eyes are now attuned to the very clean and minimalist designs of the modern Web, scrolling through the unearthed slabs of misaligned text, poorly made graphics, and abundance of hit counters would be like browsing the circles of Web design hell. Askin doesn’t see it that way.

“There’s a real rawness to the design of the Web pages,” he explained. “I think users were less critical of Websites and creators had a less polished approach.”

In an era of the Web where personality comes out primarily in what you like and share rather than in what you make, GeoCities has a charm for anyone who cherishes expressionism, even (or especially) when it’s done with more passion than eloquence.

“The tone of voice was a lot more personal. The other striking thing was so much of the Web was ‘under construction.’ It was totally acceptable to build just 50 percent of a *NSYNC fan page and call it quits,” Askin said. “Exploring those Websites was exciting – you never knew what was coming up next.”

One thing that Askin hopes is next: finding his own GeoCities site that he made back in the day. He said he remembers making one, “complete with a jokes section.” But so far, he hasn’t been able to find it. “I’ve been searching. Maybe one day it will be archived.”

Until then, he’ll have to continue expanding his new site to breathe life back into the assets from those who were once his neighbors.