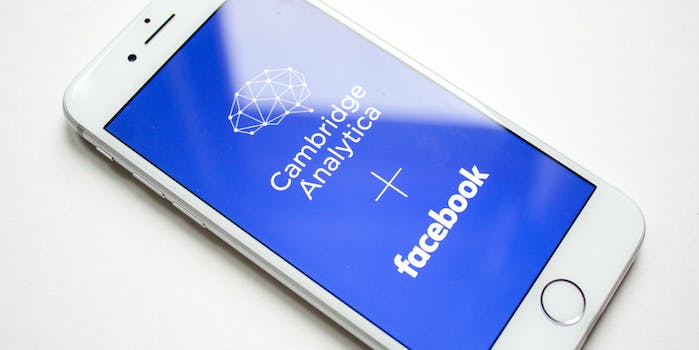 Employees are being asked to leave immediately.

Cambridge Analytica, the political data firm that purchased data on 87 million Facebook users from a third-party app, is reportedly shutting down, Gizmodo and the Wall Street Journal report.

The company’s parent company, SCL Group, is reportedly exiting the market and asking all employees to return their keycards and computers immediately. Workers in New York were told to leave the office as soon as possible without hearing of any potential compensation. The decision was announced in a conference call led by SCL group chairman Julian Wheatland, who was recently appointed CEO.

Wheatland said she examined all possible options but cited ongoing investigations into Cambridge Analytica’s data harvesting practices, its plummeting reputation, and client loss as primary reasons for closing the offices. Mounting legal fees in the U.S. and abroad made it too expensive to continue operations.

The firm’s offices in London, New York City, Arlington, Virginia, and Washington D.C. will close down.

Changes were anticipated after Cambridge Analytica suspended its CEO Alexander Nix and launched an investigation to determine whether it engaged in any wrongdoing. The company’s employees were even expecting today’s fallout as dire images were posted to an internal chat suggesting its demise was imminent. But despite warnings, the feeling from employees was one of “shock,” according to an unnamed source speaking to Wired, “There was indication the company was in trouble and change would be coming, but we didn’t see this as the resolution,” they said.

In the U.K., authorities were seeking a warrant to investigate SCL Group for potential misconduct, and in March, Britain’s Information Commissioner’s Office, a data watchdog group, raided its London office.

Nigel Oakes, the founder of SCL Group confirmed to the Wall Street Journal that both companies were closing down. According to the Journal, the company has not secured a single U.S. political client since the 2016 elections when it used controversial techniques to help the Trump campaign.

Cambridge Analytica is the driving force behind the ongoing Facebook data scandal. It purchased the personal data of 87 million users from a personality test app called “This is Your Digital Life,” created by Cambridge professor Aleksandr Kogan. After Facebook discovered the transaction in 2015, it demanded Cambridge Analytica delete all the information it had obtained.

It failed to do so. In response, Facebook suspended Cambridge Analytica and SCL Group from its platform but only after simultaneous reports from the New York Times and the Guardian revealed the privacy breach earlier this year.

The company confirmed it had filed for bankruptcy in a statement on its website.

“Over the past several months, Cambridge Analytica has been the subject of numerous unfounded accusations and, despite the Company’s efforts to correct the record, has been vilified for activities that are not only legal, but also widely accepted as a standard component of online advertising in both the political and commercial arenas.”