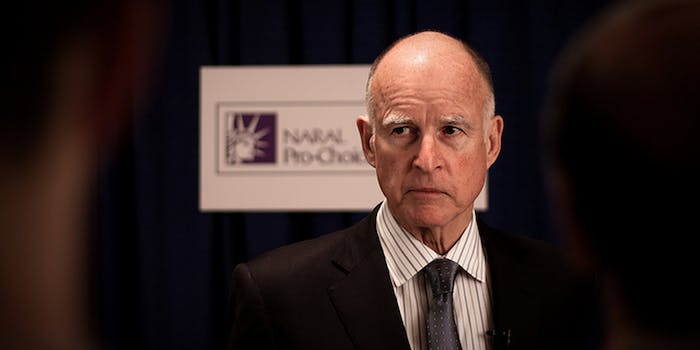 California has become the third state to pass legislation that makes it unlawful for companies to ask its workers to forfeit their social media account passwords.

On Friday, Gov. Jerry Brown signed into law Assembly Bill 1844 (AB 1844) and Senate Bill 1349 (SB 1349). AB 1844 protects employees from having to give their passwords to their employers should they ask for them. SB 1349 makes it illegal for universities to demand that current and prospective students grant them that access.

Maryland and Illinois passed similar legislation to AB 1844 in April and August, respectively.

Brown took to various social media platforms to announce the signing of both bills.

“California pioneered the social media revolution,” he said on Facebook. “These laws protect Californians from unwarranted invasions of their social media accounts.”

Facebook’s Statement of Rights and Responsibilities already prohibits this practice.

AB 1844 also contains a clause that leaves the enforcement of the law to the discretion of the California’s Labor Commissioner.

“Notwithstanding any other provision of law, the Labor Commissioner, who is Chief of the Division of Labor Standards Enforcement, is not required to investigate or determine any violation of this act.”

The signing is largely symbolic and solves a problem that isn’t an issue. So far, there have only been two instances nationally where individuals had to hand over their social media passwords to an employer and/or authorities. In Maryland, the state’s Department of Public Safety and Correctional Services demanded that correctional officer Robert Collins to hand over his Facebook password. In Minnesota, a middle school student was forced by her principal to forfeit her login information. The American Civil Liberties Union took up Collins’ cause, and a United States circuit court ruled the school had violated Minnesotan girl’s constitutional rights.