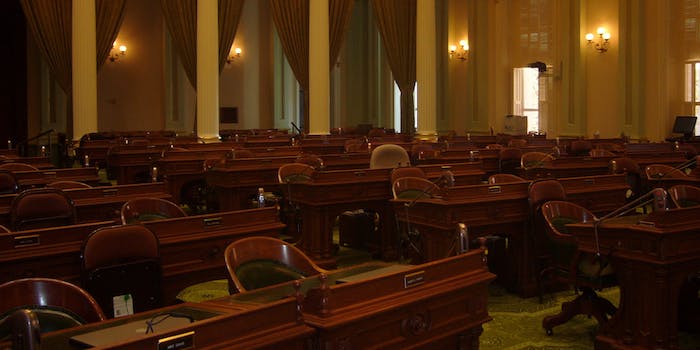 A proposed bill would render illegal the act of disseminating nude or revealing images “with the intent to cause serious emotional distress.”

The bill, which already passed in the State Senate, would render illegal the act of disseminating nude or revealing images “with the intent to cause serious emotional distress” to the subject. The bill covers those pictures and videos “in which the person being photographed or recorded has a reasonable expectation of privacy,” which gets around the issue of the victim having likely given consent at the time.

The language of the proposal frames the offending behavior as “Disorderly conduct: invasion of privacy.” Disorderly conduct is a misdemeanor that in California carries a penalty of up to $1,000 or six months in county jail; for a second offense, the guilty party faces a $2,000 fine or a year in the clink.

That may be enough to dissuade a few angry guys from uploading nude photos of their ex-girlfriends, but it doesn’t assign any responsibility to other people who may circulate photos and cause them to go viral, to say nothing of the websites that host such images, which have a curious immunity to legal interference thanks to Section 230 of the federal Communications Decency Act, which absolves them of liability for user-submitted content.

Opponents are of two factions: the free-speech advocates (the American Civil Liberties Union initially objected to the bill’s broadness but has been quiet of late) and those who would rather see police go after these revenge-porn auteurs on charges drawn from established laws against harassment and stalking. The terms of those laws, however, have more to do with repeated behaviors. In this case, it’s more common for someone to post a picture once and let the Internet do the harassing for them.

So why haven’t more states taken steps to allow the victims of nonconsensual pornography better legal protection? As of today, New Jersey is the only one to have implemented a law against the practice, while Florida rejected a similar measure over First Amendment concerns, and Missouri’s supreme court actually struck down part of a 2008 anti-cyberbullying law.