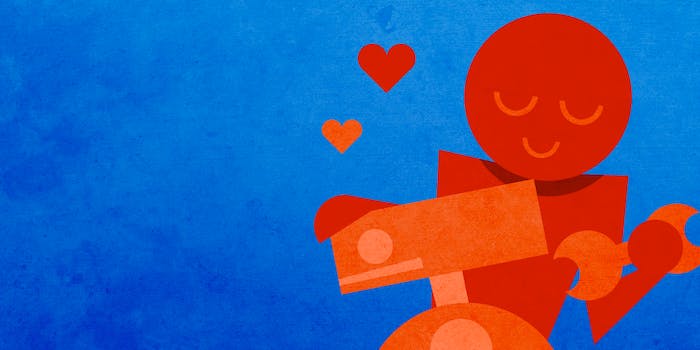 You trust robots more if you’re allowed to build them yourself, research suggests

It turns out if you want people to get invested in robots you need to let them get hands-on.

A new study by scientists at Penn State University’s Media Effects Research Laboratory shows that allowing users to participate in the building and setting-up of technology makes them more receptive to working with the robots. Basically if you let them build it, they will come back.

The study looked at 80 undergrads, and had them take part in a robot assembly study. Each group was given a Kumotek KT-X Gladiator robot. One group watched a demonstration on how to install the robot’s battery, connect it to a computer, and set up its software. The other group was allowed to set up the robot themselves, working on the machine rather than simply watching a demonstration. After the robots were set up, the two groups were given 5 to 10 minutes to use them, and then asked to fill out a survey about their feelings towards the robots.

If you’re a hands on learner the results won’t surprise you:

The results of the study clearly demonstrated that robot users hold higher sense of self-agency when they set up a robot by themselves, which generated more positive evaluations to the robot and the interaction process. As with self-assembling furniture and self-designing products, building a robot also seem to have generated a positive “I designed it myself” effect. The perceived sense of ownership is a significant determinant, which in the absence of actual or legal ownership, could lead to an increase in valuation of the robot.

By setting up a robot and familiarizing oneself with the robots’ inner workings rather than simply interacting with a pre-assembled robot, individuals indeed get the feeling that the robot is “mine,” thereby cueing the “own-ness heuristic” (that which I own is good), and leading to positive consequences for evaluations of the quality of the robot as well as its interaction with users.

If you want users to connect to your robot, it turns out allowing them to build it, or at least set it up, is better than simply showing people how it works. The study doesn’t attempt to suggest how long the positive effects last, meaning these methods may not be effective towards building long term goodwill towards a machine. Still, if you’re in the process of building your own Skynet maybe take this study to heart. People are much more likely to get on board with your robot overlord if you let them put some of the pieces together themselves.