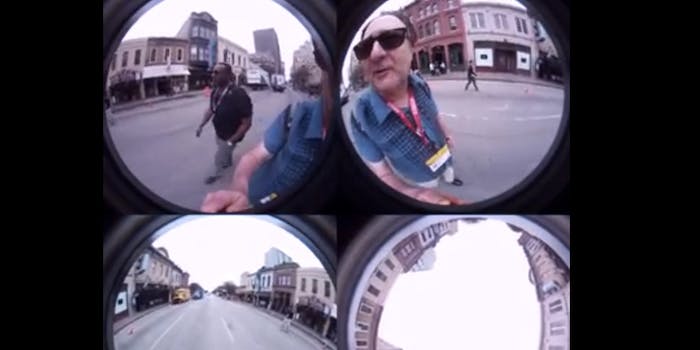 Bublcam took us on a 360-degree tour of SXSW

While virtual reality dominated South by Southwest, there was another imaging concept that got a fraction of the spotlight: 360-degree video.

Cameras that offer 360-degree panoramas use four or more lenses to simultaneously capture images or videos, and stitches them together into a single frame or video clip using a rendering process that takes place either in the camera or via outside software. These new cameras have no built-in viewfinder, but do allow the user to get a view of live capture via a mobile application. For the most part, users attach a selfie-style stick or tripod to elevate the camera and enhance the experience and output.

On the exhibition floor, VSN Mobile had its V.360 camera on display, and others including Kodak’s PixPro SP 360 and the Ricoh Theta spotted in the crowd of snap-happy photographers. Outside of the show floor, the Kickstarter-funded Bublcam showed up along with founder Sean Ramsay. The crowdfunding campaign for the camera raised more than three times the $100,000 ask, with finished products on the way to selected backers in soon.

On day three of SXSW, I had a chance to go hands-on with the Bublcam, walking down Austin’s 6th Street. For photographers and videographers, the lack of an in-camera viewfinder takes some getting used to. Using a second device to keep track of what you are shooting works well, but remains somewhat awkward for old-school camera buffs.

As Ramsay explained, the 360-degree camera shouldn’t be thought of as a replacement, but more of an accessory. The ability to intersperse 360-degree footage with that taken by a traditional video camera can create a compelling experience for the viewer.

It’s an innovative technology, and one that has plenty of use-cases, including video monitoring. But there are creative possibilities too: Imagine Google Street View-type imagining for the everyday user… or maybe, almost everyday user. Such devices remain prohibitively expensive for plenty of us. But as their popularity grows, perhaps it won’t be too long until more of us can start capturing the entirety of the world around us.