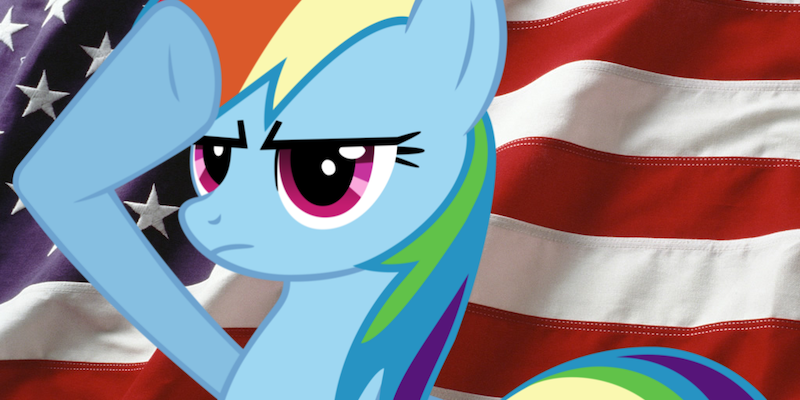 My Little Pony: Friendship is Magic may be a show targeted at kids, but its reach is much farther than that. It’s attracted bronies and pegasisters— and it’s even drawn Ron Paul supporters.

A brony and Ron Paul supporter who goes by the moniker Mistre Specter has found a pulpit on Twitter for both interests. Using the handle @Bronys4RonPaul, he tweets about ponies, Paul, and the unexpected intersection between the two.

“Ron Paul has been a consistent voice for liberty and is anti-war and it just seems natural that his message fits the “Friendship is Magic” mantra,” Specter told the Daily Dot. “I started the Bronys4RonPaul account in early December 2011 to combine my two favorite obsessions into one and to help spread the word about both MLP: FiM and Ron Paul’s message of liberty.”

Specter, a 39-year-old retail industry employee out of Indianapolis, said he doesn’t think that being a brony is automatically connected with being a Ron Paul supporter.

“I don’t expect Lauren Faust [the show’s creator] or the entire brony community to be Ron Paul supporters, but I’m a brony that spreads the voice of liberty and embraces the message of tolerance and love through the magic of friendship,” he said. “So far, 212 Twitter followers agree with me.”

However, Specter believes that My Little Pony: Friendship is Magic reveals a libertarian subtext.

I think each show has a libertarian message whether the creator, Lauren Faust intended it or not. Even though Equestria is a monarchy, Celestia, the Princess ruler seems to allow her subjects to be empowered and not be hindered by over regulations of government. She seems to want all Equestrians to learn about their own liberties and the ponies report back to her what they have learned.

A veteran soldier, he perceives the politician’s message as one for liberty and peace. For these reasons, he thinks Paul’s favorite pony on the show might be AppleJack.

“I would guess that Ron Paul would like AppleJack, the cowboy pony that works hard at growing and gathering apples for the other Equestrians,” he reasoned. “Ron Paul gathers knowledge about the Constitution and Austrian Economics and teaches us all about liberty.”

Specter, who declared his favorite pony to be daring tomboy Rainbow Dash, told the Daily Dot that he’s had his fair share of trolls and naysayers, whom he deals with by blocking. However, he said a Twitter troll was his inspiration for the account. He has formed an unlikely alliance with parody account @Juggalos4Mitt, which pretends to be an Insane Clown Posse fan and Romney supporter.

“My first troll and rival, @Juggalos4Mitt just today revealed that he is also a brony, as well as a furry. I don’t know if he’s ‘taking the piss’ or not but this is a major breakthrough in online alliances. He was my inspiration to adopt the twitter handle, Bronys4RonPaul after all,” he said.

It’s all about not taking the trolls too seriously, Specter said. After all, when you’re taking as unusual a stance as a brony for Ron Paul, it doesn’t hurt to show a little tolerance.

“Others have asked curious questions about how I exist and I answer back honestly and jokingly,” he said. “It’s all about fun too!”