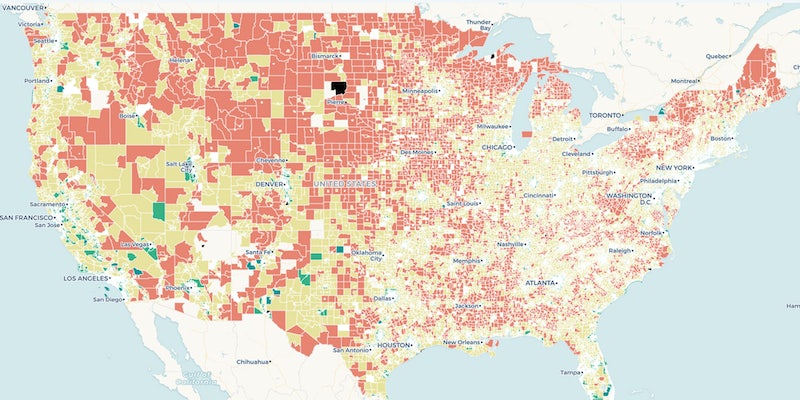 The estimate is much higher than the government's or other independent research.

A new map estimates that nearly 60 million Americans are not connected to the internet, a number that vastly exceeds both the government’s own estimates and other independent research.

LightBox, a real estate data company, released its map on Thursday. The map allows people to see Census tracts and what percent of residential locations within them have internet. Each Census tract is color-coded, with red suggesting that between 1% and 50% of residents are connected. Overall, LightBox says nearly 60 million people—or 1 in 6 of Americans—don’t have access.

The company used address data and 2 billion Wi-Fi access points to generate the data, according to CNET.

The digital divide in the U.S., the gap between those who have access to high-speed and affordable internet and those who don’t, has long been an issue. However, the coronavirus pandemic highlighted how vast the divide was, with people relying on the internet to go to work, school, and receive telehealth. Images went viral amid the pandemic of children using Wi-Fi in fast food restaurant parking lots to connect to the internet.

The Senate recently passed a massive infrastructure package that allocates $65 billion for broadband. Part of the funding will make an existing broadband bill subsidy program extend indefinitely, while the rest of it will be aimed at narrowing the digital divide.

“Accurate and granular maps based upon precise location data, serviceability, and analytics are required for government investment to be targeted and rapidly deployed to the communities in need,” LightBox CEO Eric Frank said in a statement. “LightBox has created this map based on our national Broadband Serviceable Location Fabric. Geospatially overlaying Wi-Fi location data has identified the gaps in connectivity. Whether the gaps are a function of lack of adoption or lack of service can now be tracked and appropriate remedies can be set in motion.”

The nearly 60 million estimate of those without internet by LightBox is far higher than other recent estimates.

Broadband Now published research in May that estimated 42 million people lacked access to broadband. That number also dwarfed an estimate from last year by the Federal Communications Commission (FCC), which pegged the digital divide in the U.S. at 14.5 million people.

The FCC’s maps are notoriously underreported and flawed. A common critique of the maps is that if one home within a Census block reports that they have broadband connectivity, the entire tract is considered to have access to the internet by the agency. Another common concern is what the government defines high-speed internet as—25 Mbps for downloads and 3 Mbps for uploads—is too slow.

Despite this, the FCC—under Republican leadership at the time—touted the 14.5 million number.

However, Acting FCC Chairwoman Jessica Rosenworcel, a Democrat who was named acting chair by President Joe Biden in January, announced earlier this year that a task force was created that would “coordinate and expedite the design and construction of new systems for collecting and verifying data” that would “more accurately measure and reflect our broadband needs.”

In June, the Biden administration also released its own map showing broadband access in the country, which showed large swaths of the U.S. without high-speed internet.