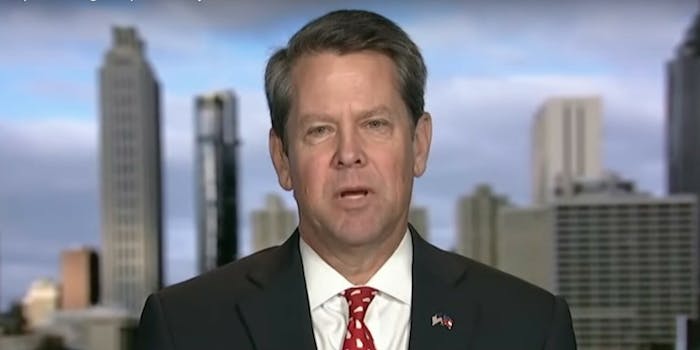 Kemp's comment to donors were revealed in a leaked audio recording.

Georgia Republican Secretary of State Brian Kemp, who is running for state governor against Democrat Stacey Abrams, expressed his concern that “if everybody uses and exercises their right to vote” his campaign might have a problem.

The comments were secretly recorded by an attendee of a supporters event held last Friday at the Blind Pig Parlour Bar in Atlanta. The 21 minutes and 12 seconds of audio was then shared with Rolling Stone magazine.

Early in his remarks, Kemp complained about the “tens of millions of dollars that [Abrams’ campaign] are putting behind the get-out-the-vote effort to their base” before claiming that the Abrams was hoping to gain from on absentee ballot requests.

“They have just an unprecedented number of that,” he said, “which is something that continues to concern us, especially if everybody uses and exercises their right to vote—which they absolutely can—and mail those ballots in, we gotta have heavy turnout to offset that.”

Kemp is currently being sued by the NAACP over reports by the Associated Press that he was using his position as secretary of state to suppress minority and women voters. The investigation found that his office suspended more than 53,000 voter registrations, roughly 70 percent of which were from Black Georgians.

It’s rare that a candidate would hold such authority over ballot registrations for a race in which they are running, let alone express concern about citizens turning out to participate, but Kemp’s wider record on this issue is the focus of several investigations.

American Public Media reported just last week that Kemp purged around 107,000 voters from Georgia’s voter register in 2017. He is also being sued for leaving voter records exposed to hacking.

Kemp’s campaign refused to comment on the comments or audio recording when questioned by Rolling Stone.