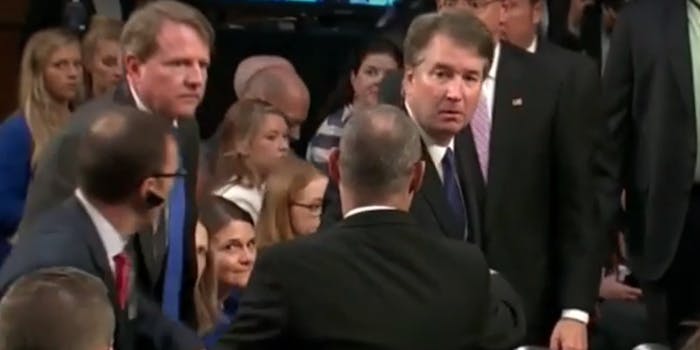 Judge Brett Kavanaugh, President Donald Trump’s Supreme Court nominee, refused to shake the hand of the father of a victim of the Parkland school shooting as he left for a lunch break during his confirmation hearing before the Senate Judiciary Committee on Tuesday.

Fred Guttenberg, whose daughter Jaime was killed in the Marjory Stoneman Douglas High School mass shooting in Florida back in February, gave an account of the televised exchange via Twitter.

Just walked up to Judge Kavanaugh as morning session ended. Put out my hand to introduce myself as Jaime Guttenberg's dad. He pulled his hand back, turned his back to me and walked away. I guess he did not want to deal with the reality of gun violence.

In footage that has emerged of the incident, Guttenberg can be seen approaching Kavanagh as he makes his way out of the room. The father taps Kavanagh on the shoulder and reaches out his hand. Kavanagh pauses, looks at the man directly in the face, before turning his back and walking away.

Fred Guttenberg, father of Parkland victim, Jaime, tries to shakes hands with Brett Kavanaugh: "My daughter was murdered at Parkland."

White House says an "unidentified individual approached" Kavanaugh, but "before the judge was able to shake his hand, security had intervened." pic.twitter.com/IerpDMOW0h

By that time, however, Americans were judging for themselves as the clip and images went viral. Gun control activists, in particular, were outraged by the incident.

Parkland shooting survivor David Hogg, a figurehead of the movement for gun reform laws in the wake of the killing spree, tweeted that it was a picture “worth thousands of lives” before urging his followers to call lawmakers immediately in a bid to halt the confirmation.

Most pictures are worth a thousand words…

The NRA has spent millions of dollars to appoint Kavanaugh it's going to take 1000s of phone calls to stop this man. pic.twitter.com/R2h65VQs4k

“The NRA has spent millions of dollars to appoint Kavanaugh,” Hogg writes. “It’s going to take 1000s of phone calls to stop this man.”

The National Rifle Association enthusiastically threw its support behind the conservative nominee, whose record on gun control issues and the Second Amendment is defined by a 2011 dissent in Heller v. District of Columbia, where he argued that Washington, D.C.’s ban on semi-automatic rifles was unconstitutional.