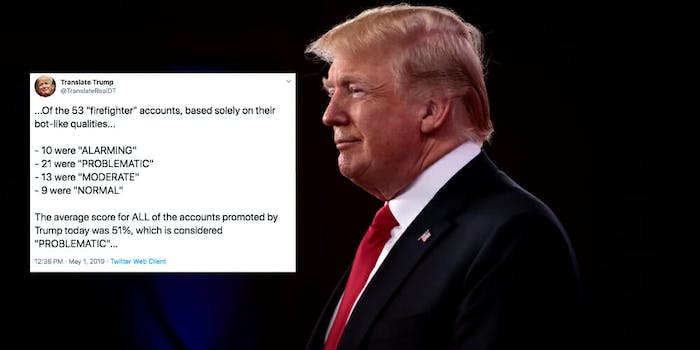 Many of the accounts were rated high for bot-like activity.

President Donald Trump went on a fiery Twitter storm Wednesday after the national firefighters’ union gave its coveted endorsement to his 2020 Democratic challenger Joe Biden. And many of the accounts that Trump retweeted are likely Twitter bots posing as firefighters, according to an analysis of his retweets.

The “firefighters” all threw their support behind the president after Biden received the firefighter endorsement Monday. Trump retweeted them to show the world that firefighters actually do like him, despite the endorsement.

The president retweeted pro-Trump tweets from the 53 different firefighter accounts, which were all replying to Fox News personality Dan Bongino. There were likely some bot accounts posing as Trump’s firefighter fanbase in the mix, a Twitter account dedicated to calling out Trump on his inconsistencies found.

…Of the 53 "firefighter" accounts, based solely on their bot-like qualities…

The average score for ALL of the accounts promoted by Trump today was 51%, which is considered "PROBLEMATIC"…

The Twitter account, Translate Trump, ran the retweets through a bot detection platform called Bot Sentinel “out of curiosity.” Bot Sentinel, which claims to be nonpartisan and have a 95% accuracy rate, looks for bot-like qualities in accounts, or accounts that “exhibit irregular tweet activity related to politics.”

Translate Trump told the Daily Dot that the average score for all of  Trump’s retweeted accounts combined was 58% in an “alarming” or “problematic” rating. This means that many of the accounts display bot-like behavior regarding their online political activities.

Translate Trump also pointed out that a dozen of the accounts have either no avatar or stock image as their profile picture. For some, the tweets were the first mention of any “firefighter-related content.”

…Here's what it means:

In 2016, Trump and his team promoted content that was produced or popularized by automated accounts, some from foreign origins. They pushed false and misleading content in efforts to sway public opinion.

“Trump is often painfully transparent, yet the replies, fact checks, contextualizations, and translations of his attempts to lie to the American public rarely get the full measure of oxygen they deserve,” Translate Trump said in a message to the Daily Dot.

Translate Trump said it initially saw some red flags in several of the firefighter retweets coming from Trump’s account.

“I surmised that they would, en masse, do poorly when run through a ‘bot or not’ calculator,” Translate Trump said. “If they were all firefighters from red states… with ‘normal’ Twitter presences, you would have seen a far different set of results coming out of Bot Sentinel.”

Translate Trump then posted a list of the accounts in descending order, beginning with those most likely to be bot accounts. The account also called on concerned individuals to report, mute, and block the accounts.

Our democracy is under attack.

Our president is (at best) asleep at the wheel, (at worst) aiding & abetting.

“I didn’t want a single Trump tweet to go unanalyzed, undirected, un-fact-checked, or unchallenged,” Translate Trump said. “When you have the biggest bully pulpit on earth, it is only fair that some healthy alternatives get at least some time in front of your online audience as well.”