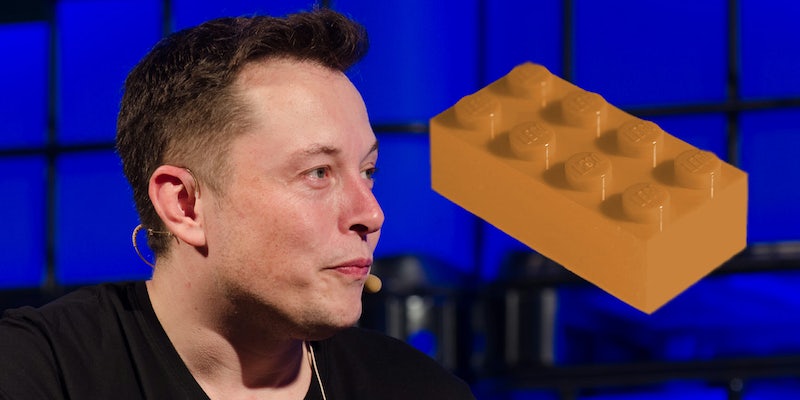 Would you build a house out of Boring Company Lego bricks?

Elon Musk’s Boring Company is a curious thing. Technically, it’s a tunnel construction company designed to bore holes for Musk’s Hyperloop project. While The Boring Company has a few tunneling projects underway, it’s also embarked upon a few interesting fundraising side projects such as selling flamethrowers. Its latest, though, is life-size Lego bricks.

Unlike flamethrowers, which came completely out of left field, these life-size (as opposed to tiny toy-size) bricks make sense for a company boring holes through the ground. The bricks will be made from the rock The Boring Company cuts out of the earth.

Musk announced the move in a couple of tweets late Sunday night.

According to the tweets, these bricks will be strong enough for use in actual construction. They’ll be rated for California seismic loads, “super strong,” but not too heavy because they’ll have holes in the middle.

While Musk says they’ll be “life-size,” however, it’s unclear exactly what that means. Will they be the size of standard red construction bricks? The size of the bricks used to construct the Egyptian pyramids? Or does he actually mean that they’ll be tiny like real-life Lego bricks? Thus far, any details beyond these tweets are scant. (Although one thing we do know: These bricks should stand up against the flames of The Boring Company’s flamethrower. So that’s something.) Hopefully, Musk or The Boring Company will enlighten us with further information on the bricks’ size, pricing, and estimated shipping date at some point soon.

Still, of The Boring Company’s side projects, this one definitely makes the most sense. Buyers will get pieces of Hyperloop memorabilia, and the project itself should ensure that little of the stone dug out of these tunnels goes to waste. Although to be honest, Musk likely could have done the same thing by using the stone to create bookends, furniture, or home and garden décor. But where’s the fun in that?