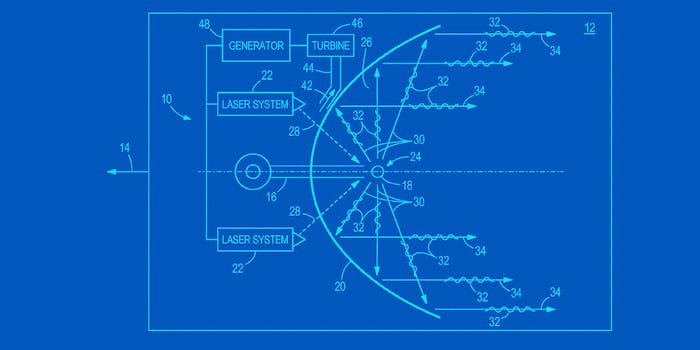 The United States Patent and Trademark Office approved a patent last week filed in 2012 by Boeing to create an engine made out of atom bombs and laser beams.

The patent describes an engine in which a laser fires at radioactive material held within a bell-shaped chamber. The laser vaporizes the material, in essence creating a thermonuclear fusion reaction. The waste products, hydrogen and helium, then exit the engine at high speed, spinning the Boeing turbofan and providing power.

It’s a sort of perpetual motion machine. The chamber is painted with Uranium-238, which, as Nancy Owano from Phys.Org put it, “reacts with the neutrons from the nuclear reaction and generates immense heat.”

That heat excites the coolant surrounding the chamber, which is fed through another turbine to power the generator, which provides the power for the lasers.

And the circle of life is complete.

Or, to quote from the patent application itself:

Alternatively, when the propellant 18c of FIG. 4 is utilized in the embodiment of FIG. 1, the laser system 22 of FIG. 1 may comprise one or more free-electron lasers for providing pulsed laser beams to vaporize, using pulsed laser beams, pellets each comprising the propellant 18c of FIG. 4. As a result of the compression of the Deuterium and Tritium by ablation of the solid surfaces 36c and 50 with the free-electron lasers, the gas mixture reaches sufficiently high temperatures to cause a release of energy, alpha particles and neutrons which causes additional neutrons to be released by the Beryllium layer 50 which causes some of the U-238 layer 52, which is fissionable by `fast` rather than `thermal` neutrons, to fission, release significant energy, and explode. The secondary explosion recompresses more of the Deuterium and Tritium, causing more fusion energy to be released beyond the `breakeven` level vaporizing the remaining pellet materials of the propellant 18c and increasing the overall thrust and exhaust velocity.

Relax. Nothing in that preceding paragraph made sense to anyone. Think of it as a prose poem providing an objective correlative to inspire a sense of awe in whatever futuristic Major Kong winds up riding that bomb to the end of tomorrow.

According to the patent application, in addition to airplanes, the types of vehicles this engine could power “may comprise a spacecraft, a rocket, an aircraft, a missile, or another type of propelled vehicle.”

Presumably citizens will be asked to vote between christening the spaceship the U.S.S. Bond Villain or the U.S.S. Lost Bugs Bunny Episode.