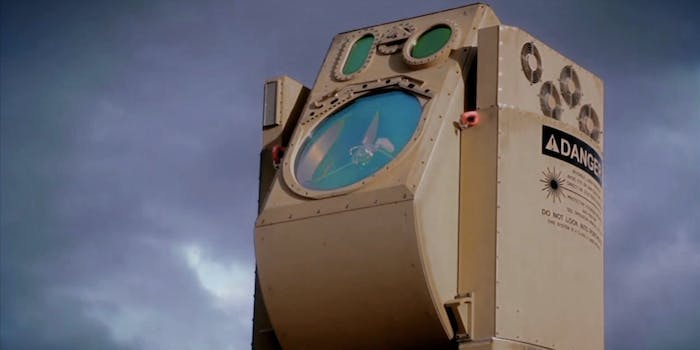 Its beam literally travels at the speed of light. No drone is safe.

Unlucky for them, Boeing has a new high-precision weapon designed to fire lasers at drones to burn them out of the sky. The High Energy Laser Mobile Demonstrator system, or HEL MD, was created to defend military airspace and other potential targets. Naturally, Boeing’s project echoes the recent history of civilian distaste at the privacy-invading, high-flying aircraft.

The HEL MD’s laser weapon is accurate enough to target specific sections of an unmanned aerial vehicle, disabling or destroying it depending on where it fires its beam. Because the beam travels at the speed of light, it effectively reaches its target instantaneously—there’s no outmaneuvering it.

Despite such precision, the weapon is compact enough to be carried in four suitcases by two soldiers.

Boeing has not revealed any details on the cost of the system, but David DeYoung, director of Boeing Laser & Electro-Optical Systems, told Wired that the system could run for years with basic maintenance and continuous electricity. Its only moving part is the rotating gimbal that aims it and moves it in sync with a targeted aircraft. Since a laser is a type of light, there are no ammunition costs either.

Beyond Boeing’s drone death machine, it’s no surprise that the advent of drones is coupled with a wave of anti-drone sentiment. After all, the robotic aircraft keep showing up where they’re not supposed to: by the White House, in the way of passenger airplanes, next to killer whales—when it comes to drone usage, 71 percent of Americans effectively say, “Not in my backyard.” If a contentious California law passes, flying a drone on someone else’s private property will become a crime akin to trespassing.

Such a law would have been useful if it applied to a New Jersey man named Russell Percenti when he shot down a drone hovering near his property last year. He was indicted on Tuesday for criminal mischief and possession of a firearm for an unlawful purpose. One imagines the military having no such issues in its own battle against unmanned aerial vehicles.

By August of 2015, pilots had reported a total of 650 drone sightings for the year. For comparison’s sake, there were 238 such sightings in all of 2014. As drones proverbially take off, popular anti-drone opinion is sure to increasingly clash with hobbyist and commercial drone usage.

We can only hope that tension plays out with plenty of lasers.