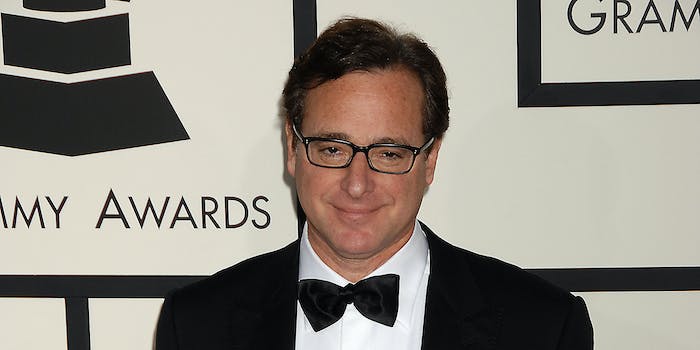 Much like other celebrities, conspiracy theorists are convinced the COVID booster killed the famous actor.

The death of actor Bob Saget is already proving to be fodder for anti-vaccine conspiracy theorists. They’re convinced he was killed by the COVID-19 vaccine.

Saget died in Florida on Sunday at the age of 65. Over his decades-long career, Saget spun a dichotomous talent into fame, becoming equally beloved as the wholesome dad Danny Tanner on Full House and as a raunchy, foul-mouthed comedian.

Saget’s death was a shocking blow to his many fans and friends. Tributes poured in from around the web. His friends in comedy were devastated. “Just the funniest and nicest…” Jon Stewart tweeted. Gilbert Gottfried said he was “still in shock.”

Conspiracy theorists wasted no time exploiting the legendary entertainer’s untimely demise. Saget’s cause of death hasn’t been revealed, but to anti-vaxxers, his death could only have been caused by the vaccine.

The sole shreds of evidence for such rumors appears to be a joke Saget made on Twitter last summer and him mentioning getting a COVID vaccine booster.

In July, Saget tweeted, “I get vaccinated five to six times a day and I feel great!!” Following his death, someone commented on the tweet, “dude the jab definitely got em.”

In mid-December, Saget said on his show that he’d recently received a booster shot.

Anti-vax conspiracists, who tend to believe every celebrity death is somehow tied to the vaccine, are circulating both tweets as evidence that Saget was killed by the vaccine.

“Here is poor Bob announcing he got jabbed, #poison killed him,” tweeted one.

Another proclaimed: “Vaccinated people are dropping like flies, we need to know if the Vax is behind these sudden deaths!”

Telegram, a haven for conspiracy theorists, was also rife with rumors that Saget died from the COVID booster.

“If they’re going to say everyone that dies with a positive test is a COVID death, I’m going to say everyone that dies suddenly with the vax is a vax death,” the Blackpilled channel posted, referencing a false conspiracy theory that people who die with COVID are automatically counted as COVID deaths. In reality, they’re counted as COVID cases, which is not the same thing.

The theory that the booster shot killed Saget was unsurprisingly prevalent in QAnon circles, where nothing is a coincidence and correlation is uncritically accepted as causation.

Serious side effects from COVID vaccines are exceedingly rare. The vaccine is overwhelmingly effective at reducing the risk of death or hospitalization from COVID.