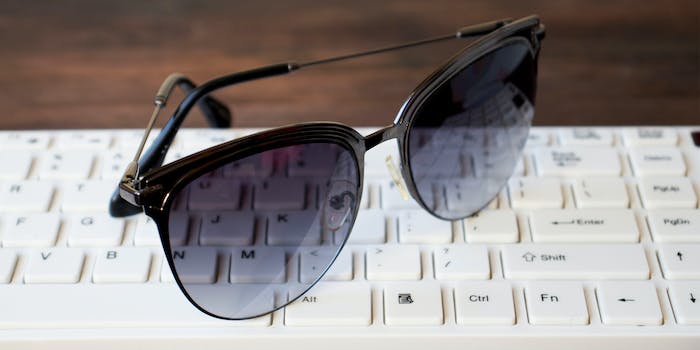 Do apps and glasses that filter blue light actually work?

From screen dimmers to glasses, this industry might be banking on unproven science.

You’re likely looking at a source of blue light right now: Gadgets like computers and smartphones emit it, along with LED light bulbs. You might have also heard—or read a headline claiming—that blue light is bad for you.

But like the years-long debate on whether radiation from cellphones or Wi-Fi networks cause cancer, the truth about blue light’s health effects is murky.

Nevertheless, the evolution of technology health concerns has led to a fascination with apps and gadgets that filter blue light. Consumers are left to flounder in the face of a marketplace that includes screen protectors, eyeglasses, and downloadable apps.

Here’s what the research on blue light actually tells us, plus a guide to navigating the blue-light-filtering marketplace.

What is blue light?

Each color in the visible light spectrum is represented by a different wavelength of light, Erin Lally of Eye Consultants of Silicon Valley explained to the Daily Dot. Blue light is a high-frequency component of the spectrum that emits energy at 380 to 500 nanometers.

Some people have raised concerns over LED light because blue light is said to be able to penetrate all the way to the back of the eye. Concerned parties think this could cause damage such as macular degeneration, which leads to blurred vision, making it necessary for individuals to protect themselves against too much screen exposure.

Despite the popular beliefs, Lally contends there is “no scientific evidence” that blue light coming from digital devices will harm the eye. Any discomfort or irritation from staring at your screen too long is from straining your eyes, not from the light itself.

“With intent focus on a screen or device, we blink less,” Lally said. “This results in excessive evaporation of tears from the ocular surface and leaves the eye feeling ‘sandy,’ irritated, or scratchy.”

The effects of blue light

Research does indicate that blue light disrupts sleep patterns more substantially than other kinds of illumination by causing a larger shift in circadian rhythms and a greater suppression of melatonin. Lally told the Daily Dot that because it’s stimulating, blue light can make falling asleep difficult.

While scientists know there’s a connection between blue light and increased alertness, there’s not sufficient evidence to say whether technologies that filter blue light suppress enough blue light to significantly reduce its effects on alertness or sleep patterns.

Abraham Haim is researching blue light’s effects on sleep at the University of Haifa at Oranim in Israel. He said more objective studies are needed to know whether blue-light filtering actually works and warned against studies funded by the companies who make the gadgets themselves.

Still, some companies assert the damage from blue light is more extensive than just a disrupted sleep cycle.

There’s an entire industry built around the dangers of blue light and offering products to block it. Many manufacturers claim that by using their products, consumers can reduce their risk of macular degeneration caused by blue light exposure.

Recent research has highlighted a potential link between blue light and age-related macular degeneration or other retinal problems. However, this has only been done with animal subjects, and scientists clarify it’s difficult to assess the threat to humans because individuals’ exposure to blue light varies greatly. Earlier studies that did focus on people and blue light failed to find it damaged the eyes.

Furthermore, some researchers contend that exposure to blue light in daytime can actually be good for you.

Despite the lack of scientific evidence suggesting people are damaging their eyes with the devices they use, blue light-filtering companies seem to be banking on the idea that scientists may find proof eventually. When they do, the companies claim, the people who have purchased their products will be protected.

Let’s take a look at some of the prominent blue-light-filtering products available today.

Ocushield is a blue-light-filtering screen accessory developed in the U.K. While the Ocushield website says its product safeguards screens from scratches and cracks, the item is mainly advertised as a combatant to the impact of blue light exposure on sleep and potential retinal issues.

Dhruvin Patel, optometrist and founder of Ocushield, told the Daily Dot that Ocushield products have been “rigorously tested” by the company and by SGS, a private inspection and certification company in Switzerland. Patel said Ocushield plans to undergo checks to register Ocushield as a medical device in the U.K. and conduct a double-blind study on the differences in participants who use Ocushield’s screen protectors versus those who don’t.

Of the blue-light-blocking tech considered in this article, only Ocushield provided any hard data about the effectiveness of its products. Ocushield conducted research back in 2015 to prove that its products cut harmful blue light up to 25 percent, beating competing lens manufacturers, Patel said.

Admittedly, reducing some level of blue-light transmittance is better than none at all, but we can’t ignore that the majority of blue light is still transmitted through the filters.

Most Ocushield products are device-specific, which necessitates buying a different one for an iPhone versus a computer. The filters range from about $15 to $115 before shipping.

A Pixel representative said the lenses are designed for users who experience eye strain, dry eyes, and blurred vision from spending hours in front of a screen.

“We started doing research into these eye issues and found that blue light is likely a key factor in causing these problems,” the representative said. “We began developing and testing products that blocked blue light to see if they help.”

The representative referred to several articles discussing the potentially harmful effects of blue light, none of which mentioned blue-light-blocking technologies or their effectiveness.

“While anecdotal, the responses from our customers are overwhelmingly positive,” the representative added. “Most people say that they feel less eye strain, less headaches, and more eye comfort while wearing our glasses when looking at digital screens.”

The name of this company alone suggests that by purchasing something, you’re taking a step to protect your retinas.

Unlike the other companies profiled, Retina Guard has an entire page of its website dedicated to retinal damage. It also cites a 2014 BBC article in which an optician mentions how blue light can harm the back of the eye, but that person does not go into detail about scientific sources.

Retina Guard did not respond to the Daily Dot’s request for comment.

People can buy Retina Guard products for Android smartphones and iPhones, plus Mac computers. Prices range from $14.95 to $49.95, and customers in the U.S. or U.K. can get free delivery on orders over $35.

App developers have been creating blue-light filters, too. The Night Shift Pro Android app claims it’s able to ensure eye protection from blue light and the circadian rhythm disruptions it can cause with a warm-color filter that neutralizes blue and green tones on screens.

The pro version of the app comes with five filters and costs $2.99. Google Play Store statistics broadly indicate that over 1,000 people have installed the app.

When asked if it could provide research to support the effectiveness of Night Shift Pro, Ascendik, the software team behind the app, pointed the Daily Dot toward research discussing the relationship between blue light and circadian rhythm disruption. In most of the articles, there was no mention of blue light-filtering technologies or their effectiveness.

One 2009 study came close to supporting the effectiveness of blue-light-blocking tech, but with only 20 subjects and a three-week trial, the research is unable to conclusively support the validity of blue-light filters.

“Truly, there are a lot of people who are not affected by the blue light that much,” a representative from Ascendik told the Daily Dot. “But, from our experience, one in every three users find our filter helpful and keeps using it after the first try.”

It’s unclear where the information about some people not being affected by blue light comes from, but Ascendik—like the other companies selling blue-light-filtering devices—does seem to genuinely believe the information it preaches.

Are blue light-filtering gadgets worth it?

Given the lack of evidence to support the effectiveness of blue-light-blocking products, you may conclude that these products aren’t worth investing in yet. On the other hand, if you find yourself seriously stressing over the effects of your blue-light-laden gadgets, you may conclude they’re worth trying out. Regardless, you won’t know until you try. The value of blue-light filters, for better or worse, ultimately comes down to how they make you feel—not what the science supports.

One thing’s for sure: The industry isn’t going away anytime soon.