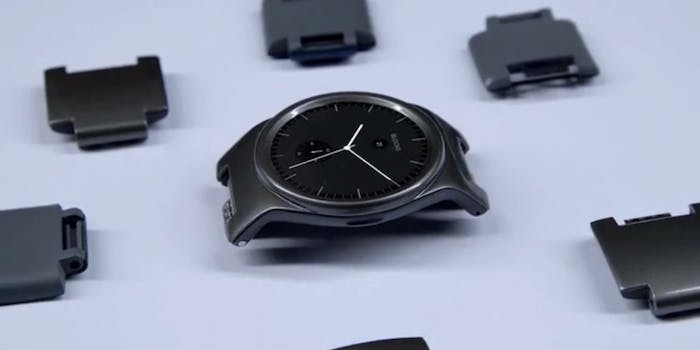 Now you can build the smartwatch you want.

There are plenty of companies making smartwatches, but that doesn’t mean you have a lot of choice. The creators of the Blocks smartwatch believe they can do things differently by letting you build the watch you want.

Blocks is taking a modular approach to the wearable business, doing away with the one-size-fits-all approach to the technology inside the smartwatch and making function as flexible as the band is. While the watch face stays the same, the strap is made up of individual links that add functionality.

While the modular concept hasn’t caught on yet in the smartphone market, there seems to be plenty of excitement surrounding the idea for Blocks. The Kickstarter campaign bypassed its goal of $250,000 in just 56 minutes. It still has over a month of funding time available and it’s all gravy from here, giving the creators plenty of time to lap their initial goal several times over—they’ve already doubled it by surpassing the $500,000 mark in under 24 hours.

The avalanche of pledges hasn’t surprised Blocks founder Alireza Tahmaseb. “We have been around for a long time and have gathered a large community before the campaign,” he told the Daily Dot. “We were expecting this. There is a lot more to come.”

Even with all of the early success that Blocks has had, it has a long way to go to reach the levels of Pebble, the original smartwatch obsession of Kickstarter—the initial campaign for Pebble topped $10 million and the follow up Pebble Time netted over $20 million.

Pebble might not be fair comparison for Blocks; even though the crowdfunded smartwatch is the most open-ended option on the market with its own app ecosystem and ability to speak with both iOS and Android devices, each watch does the same thing.

Interestingly, the idea for Blocks came well before Apple entered the smartwatch market and was born before Google released the first version of Android Wear.

“The idea of a modular smartwatch was born in December 2013,” Tahmaseb said, and was initially a gesture control wrist band. “We were looking for more features to make an ideal wearable. We asked people about their ideal smartwatch features, and found out that the ideal device does not exist.” Blocks was made to address that different people have different needs when it comes to wearables.

With its a la carte approach, Blocks intends to allow its users choose what features they need and when they need them. If you’re going on a run, plug in the modules that track heart rate, GPS, and environment. Swap in the NFC module when you’re going to the store so you can pay without pulling out your wallet. Running low on power? There’s an additional battery link that will get you through the day.

The team behind Blocks intends to expand its offerings of modules as it goes, eventually releasing an attachable link that will add more memory or contain a lens that can snap a selfie or scan a barcode.

Blocks is opting to go with an open platform that will allow anyone to develop a new module, and the company claims to have 1,500 individual developers already signed up, plus major tech companies who are working on modules of their own. The watch itself runs on Android and a development kit will be available for app creators in the near future.

While all of the links will perform unique functions, they will all connect the same way and can be swapped in and out in a snap. The watch automatically identifies the new module and accounts for it without requiring a reboot.

Of course, this approach to interchangeable will be limited by the wrist of the wearer. While the average wrist will be able to fit four modules at a time, some will get the benefit of an additional feature or will have to remove one to get the right fit.

The one thing that won’t change when it comes to Blocks is the watch face, or what the company refers to as the Core. Behind the display is the technological guts that recognize the modules and make them work. A quad-core Snapdragon 400 processor, 512MB of RAM, 4GB of flash storage, and a whole suite of sensors and means of connectivity are housed inside the Core.

Blocks is slated to be available for purchase outside of Kickstarter by May 2016 and will retail for $285 for the Core plus four modules—a price competitive with most other Android-powered smartwatches on the market. As is always the case with crowdfunded projects, there are a variety of pledge levels for backers that will earn a discounted price for the LEGO-like wearable.