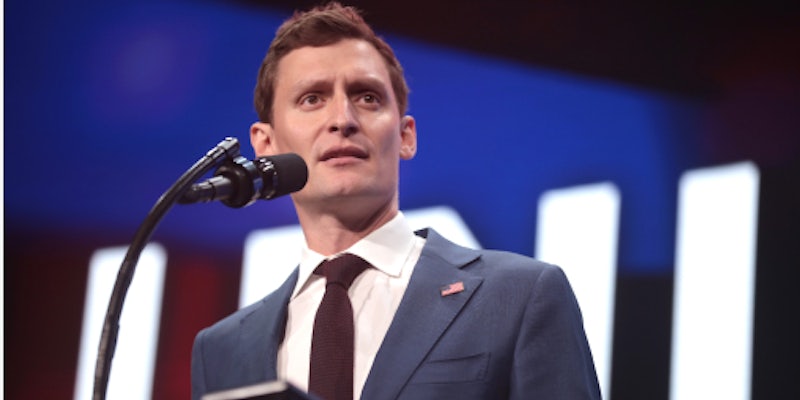 This Blake Masters’ tweet manages to be racist, sexist, and homophobic all at once

It managed to hit all 3 at once.

Yesterday, Arizona GOP Senate candidate Blake Masters attacked the Federal Reserve over an Associated Press article that highlighted the recent uptick in diversity within the Fed. In a single tweet, Masters managed to highlight his own racism, sexism, and homophobia.

Earlier this week, the Associated Press reported that the Fed’s boardroom is the “most diverse” it has ever been, with “more female, Black and openly gay officials contributing to the central bank’s interest-rate decisions than at any time in its 109-year history.”

Masters made fun of that fact, saying sarcastically that it was “a compelling explanation for why our economy is doing so well.”

The tweet landed in the midst of one of the more treacherous financial downfalls the U.S. has faced.

In a speech to the Jackson Hole symposium during the Fed’s annual economic conference, Chairman Jerome Powell warned colleagues that the country may face severe repercussions in the form of slow economic growth and increased unemployment as the country toys with the idea of raising interest rates.

At this symposium were many female economists and “high-level decision-makers,” a turnaround from the historically male-dominated conference.

This change in attendance appeared to not sit well with the Donald Trump-endorsed Masters.

Contrary to Masters’ opinion, though, high-level officials in the Fed such as Eric Rosegren, a former president of the Federal Reserve Bank of Boston, stated that if the Fed did not “have a diverse group of people in the field, we won’t have the right topics to focus on.”

Today, five of the regional bank presidents are women. Also, three African Americans and three women now are now a part of the interest-rate committee.

Economists say that a rise in diversity within the Federal Reserve will allow for a more comprehensive understanding of the economy as it affects all types of people. The hope is the Fed will be able to better tackle inflation by representing the heterogeneity of the U.S. through its members, according to a 2021 study published by the Brookings Institution.

For Masters, as it seems, this theory is nothing but a joke, as he claimed that having non-white male members on the Fed was the reason the economy was tanking.

Twitter users highlighted a number of reasons why Masters’ sarcastic remark was unwelcome.

Another Twitter user pointed out that Masters isn’t doing so well himself.

According to Ballotpedia, Masters’ opponent, Sen. Mark Kelly (D-Ariz.) is leading him by a healthy margin.

The Daily Dot reached out to Masters’ campaign for comment but did not receive a response.