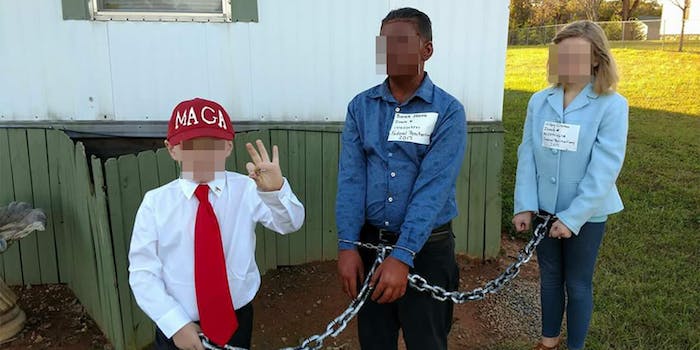 The man who posted a viral photo of his kids dressed up as Hillary Clinton, Barack Obama (in blackface), and Donald Trump was reportedly convicted of felony hit-and-run after striking and killing a Puerto Rican woman in 2016.

Yesterday, Twitter user @JonathanTalking posted the picture of his children, with the child dressed as Trump leading the other two, who wore nametags emblazoned with “inmate #” and “federal penitentiary,” along with Clinton’s and Obama’s name. The picture was captioned, “Costumes of my children two years ago…. absolutely love them!” The tweet tagged several high-profile conservatives, including President Donald Trump.

After the image went viral, allegations surfaced that @JonathanTalking was Jonathan Burgsteiner. According to local media reports, Burgsteiner was charged with felony hit-and-run after striking and killing Dalinette Trinidad Del Valle as she walked along a roadway in Catawba County, North Carolina in July 2016.

An online obituary for Del Valle, who was 21 when she died, states that her parents are Puerto Rican. It also says that she left behind two children.

According to the News Herald, after reading media reports about a piece of a vehicle that matched the car Burgsteiner had borrowed and returned damaged that night, Burgsteiner’s in-laws contacted the police.

Burgsteiner claimed to both his in-laws and authorities that he thought he hit a deer, and that he’d stopped after the accident but didn’t see anything. Police told media that the force of the impact knocked Del Valle into the embankment where she was difficult to spot. Her purse, shoes, and glasses were still in the roadway, however. Police also said that they believed she died on impact.

The Clerk of the Superior Court in Burke County, where the charges were filed, told the Daily Dot this afternoon that Burgsteiner pled guilty in July.

The picture of the kids’ costumes caused quite a stir on Twitter, some positive, though mostly negative. Many called it racist. One screenshot shows nearly 600 retweets and 1,300 likes. An archive of @JonathanTalking shows that the account had 165 followers.

My face when my dad keeps making me dress up as Hillary clinton so he can take his anger from his empty unfulfilling life out on anyone but himself: pic.twitter.com/qNqezjWA7O

Oh man! I didn't even get that they were supposed to be specific people. I thought it was the more general Maga desire to oppress women and black people.

News of the charges put the questionable photo in new context. Some speculated that the crime was racially motivated. But there is nothing in the record to indicate racial motivation, and police told media at the time that Del Valle would’ve been difficult to see.

“She was wearing dark clothing, was walking with traffic and probably was not easily visible so late at night, according to [North Carolina State Highway Patrol Trooper] Gouge,” the News Herald reports.

The so-called parent of these children killed a young girl, left the scene if the crime in 2016, then lied about it. Now, his @JonathanTalking intention is to murder his children's souls https://t.co/1H0ZZVBVcS

The guy who dressed his 3 young kids up as Trump holding Obama (in blackface, of course) and Hillary Clinton in chains and proudly posted a photo of it on here has deleted his account, and this is why. Holy shit. https://t.co/xZCvCaddSM

Sad part is he tweeted this in the hopes of garnering favor with the president and his minions. His base still denies Trump is inspiring racism but the evidence is right in front of us.

He deleted his account once everyone realized who he was and that he was on probation for killing someone.

The picture of the costumed children was still independently circulating on Twitter this afternoon.