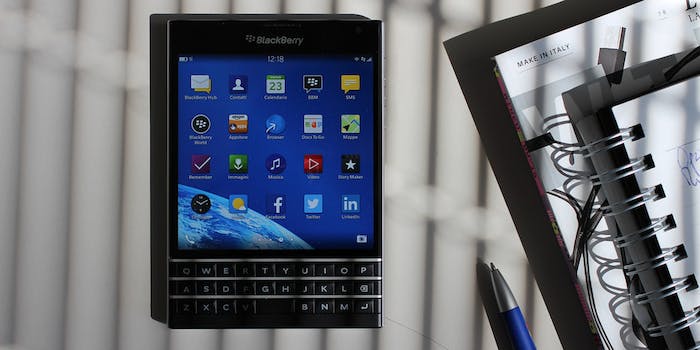 Blackberry announced a surprise profit, but no one knows what’s next

The company that refuses to die is poised for either a remarkable comeback or a total collapse.

When companies fail, they typically do so in grand fashion.

Whether it comes as a buyout, a shutdown, or an utter collapse on all fronts, many organizations implode with such spectacular gusto that they leave no doubt about their grisly demise. Not so with BlackBerry, which has been almost dying for a while now. The company just released an earnings report that manages to make its already clouded future even more hazy.

Blackberry surprised much of Wall Street by announcing that, rather than continuing to hemorrhage money as it has done on a regular basis for several years, it actually managed to turn a small profit of around five cents per share.

The news was bittersweet for investors, as the profit announcement followed news that Blackberry’s overall revenue was still at its lowest level in eight years.

CEO John Chen seemed upbeat in delivering his company’s report. He seemed to genuinely believe that his company was in the middle of a turnaround.

“Our focus this past year was on getting our financial house in order while creating a multi-year growth strategy and investing in our product portfolio,” Chen said. “We now have a very good handle on our margins, and our product roadmaps have been well received. The second half of our turnaround focuses on stabilization of revenue with sustainable profitability and cash generation.”

This public-facing smile, whether real or fake, isn’t particularly odd for a large company in the midst of financial turmoil. But the fact that BlackBerry has been suffering through poor decisions for so long leads one to wonder how long it can keep up appearances.

Analysts seem entirely perplexed by the direction BlackBerry is headed. They’ve flipped between praising the surprising profit upswing and wringing their hands over the dreadful revenue drop. For once, it seems like nobody really has any idea how BlackBerry’s future will play out.

Given recent events at the company, from the impressive BlackBerry Classic struggling to find its place to a pair of all-new devices on the horizon, the next six months will be absolutely critical for Blackberry. If Chen and his team can’t find a way to raise revenue and still eke out a profit, we may be looking at the last days of Blackberry.

Photo via pestoverde/Flickr (CC BY SA 2.0)