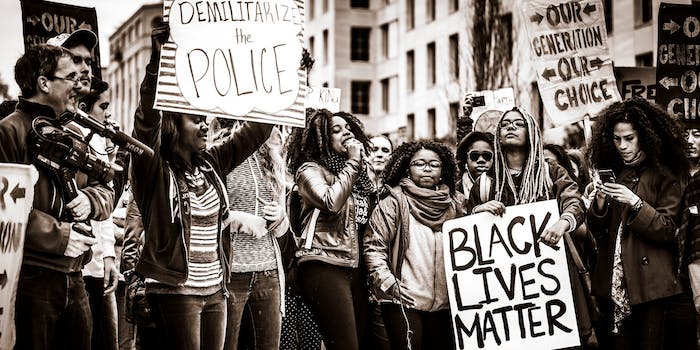 'Surveillance has a chilling effect on the constitutionally protected act of peacefully protesting.'

Three Democratic lawmakers are calling for an investigation into reports that federal agencies carried out surveillance against Black Lives Matter protests.

In a press release on Thursday, Rep. Anna Eshoo (D-Calif.), Rep. Bobby Rush (D-Ill.), and Sen. Ron Wyden (D-Ore.) announced that a letter had been sent regarding the allegations to the Privacy and Civil Liberties Oversight Board (PCLOB), an independent federal agency.

“The lawmakers’ detailed letter states the importance of protests in advancing civil rights, cites several uninvestigated press reports of protester surveillance by federal agencies, enumerates many congressional inquires on the topic, and urges PCLOB to use its statutory powers to investigate the federal government,” the press release states.

The letter specifically references a New York Times report about alleged surveillance by Customs and Border Protection (CBP) agents who used various aircraft to monitor demonstrations against police brutality and racism in at least 15 cities.

The letter also points to an incident in June in which the FBI is alleged to have used a surveillance plane over a Black Lives Matter protest in Washington D.C.

“Government surveillance has a chilling effect on the constitutionally protected act of peacefully protesting,” the letter adds.

The lawmakers’ efforts have already been applauded by the New York-based Surveillance Technology Oversight Project (S.T.O.P.), which released a statement on Thursday denouncing surveillance activity.

At least one of PCLOB board member, Travis LeBlanc, has responded thus far, telling Motherboard that he hopes his fellow members will promptly join him in opening an investigation.