White supremacists planned their trip to a Black Lives Matter protest. Then five people were shot.

That’s from an email sent Friday to a group known as Minnesota Chimpout, a white supremacist group that carefully coordinated a trip to the Black Lives Matter sit-in that’s been continuously going on since the Nov. 15 police shooting of Jamar Clark.

By “carry,” the group’s members meant bring weapons. Not every member planned to carry guns, but some did. And when they weren’t emailing plans to infiltrate the protest, they were checking up on each other on 4Chan and 8Chan‘s /pol/ (politically incorrect) boards—hotbeds for racist discourse and activity. They also communicated on SheekyForums.com.

Members knew they were treading on thin ice. At one point, a member named Blake Holland realized his name showed up in the email thread—but after a brief acknowledgement, he didn’t seem to care much. 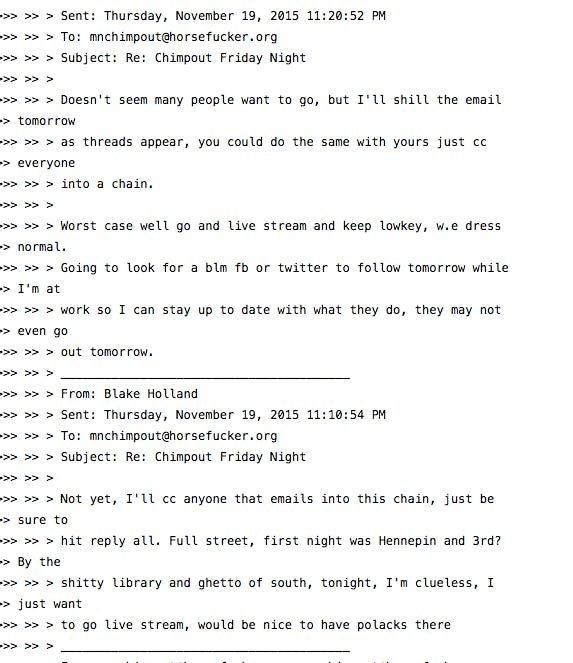 The group planned to livestream the event, after carefully following the Black Lives Matter social media accounts to check on locations and other information. Whether or not it was the same livestream that showed up on YouTube Friday night is unconfirmed—but given the blatantly racist music and commentary in the video, it seems possible the emails are related to the “IRL baneposting and loli adventures” of the guys in this video.

It’s titled “/k/ visits the justice4jamar protest,” referring to another 4chan board. On the /k/ board, “kommandos” discuss guns and other weapons, and there is a guideline stating that “Discussions about politics or current events belong on /pol/.”

In another video, one that has been widely circulated to identify two men who attended the protest and filmed the events, the men identify themselves as “Saiga Marine” and “Black Powder Ranger.”

In the same video, one of the men (who called himself Saiga Marine) flashes a gun at the camera and says, “yes, we are locked and loaded.”

At one point in the same video, the man calling himself Saiga Marine refers to “dindus,” a racist term for black people. Livestream of the Black Lives Matter Minneapolis protest also showed up on Dindunuffin.us, a url that leads to the livestream channel NTA (No Thiefs Allowed).

While video evidence proves that at least one of the “chimpout” white supremacists was armed at the protest, there are posts on Reddit‘s r/KKK group that insinuate other efforts to harm protesters—specifically by bringing poisoned food. 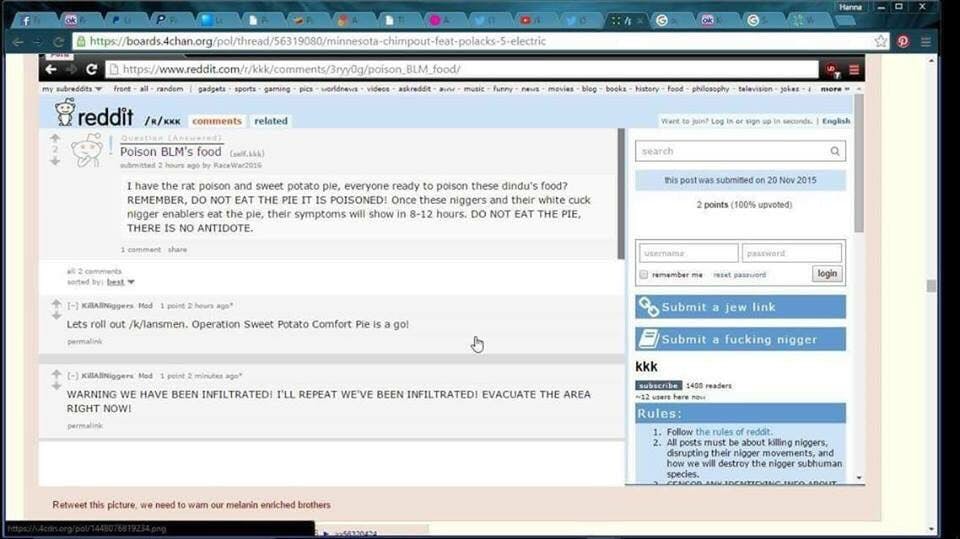 On social media, activists with Black Lives Matter, allies, and reporters began to frantically try to identify the men in the videos. Many have named someone who they suspect is Saiga Marine, though the Daily Dot was unable to confirm his identity. The Instagram and YouTube accounts (both since disabled) of the man others have identified use the same handle. According to Minneapolis police, a 32-year-old Hispanic male was arrested and then released after police confirmed he was not on the scene of the protest. Photos on Twitter showed a man who looked like the identified individual outside the police station after release. Photos circulating on Twitter do show him at the protest on Thursday, however.

The Daily Dot also reached out to Minneapolis police to try and confirm the names of the arrested suspects but was told only that the names will become public once suspects are charged. When asked if suspects would be arraigned on Tuesday night, Public Information Officer John Elder said “That is not how it works in Minnesota.”

Man arrested in S MPLS related to 4th pct shooting released. Not at scene. Two white men, ages 26 & 21 in custody: turned themselves in.

Suspects are expected to be named once police have officially pressed charges.