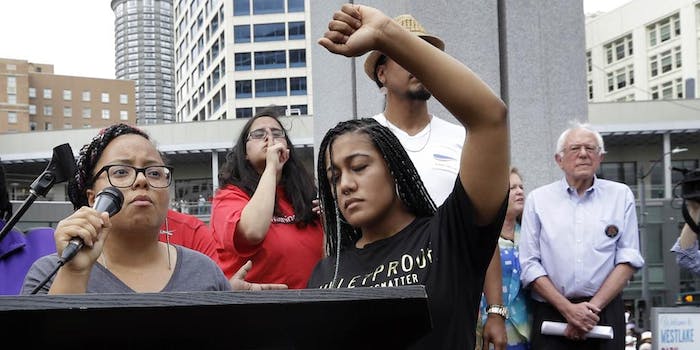 The speech was supposed to be about Social Security and Medicare.

With the anniversary of the Michael Brown shooting, the #BlackLivesMatter movement remains outspoken, and on Saturday, two women who are a part of that movement interrupted a Bernie Sanders event, took over his microphone, and eventually caused him to abandon the stage and his speech.

Though event organizers originally said the women could speak after Sanders’ speech, which was to address the Social Security and Medicare issues, the campaign relented and let them take the mic before Sanders.

One protester, identified by the Hill as Marissa Johnson, spoke about police violence in Seattle and the anniversary of Michael Brown, and she said, “Bernie says that he’s all about the people and about grassroots. The biggest grassroots movement in this country right now is Black Lives Matter.”

More from the Hill:

Some in the crowd jeered the protesters and yelled “get off the stage,” but others replied “let her talk.”

“If you care about Black Lives Matter, as you say you do, you will hold Bernie Sanders specifically accountable for his actions,” Johnson continued.

It’s an interesting moment in the campaign of Sanders, who is seemingly the most liberal of any of the potential Democratic presidential nominees but who has made missteps in the eyes of the activists. Specifically, that he too easily equates racism in terms of economic disparity and that he lacks empathy with the movement.

As the Guardian recently wrote, “In previous races, Sanders has not had to build a diverse coalition of support to win elections; his past campaigns have made little or no reference to issues of deep importance in black communities, such as voting rights protection, housing discrimination and mass incarceration. He speaks almost exclusively among issues which thrill white liberals: campaign finance reform and economic justice.  …Though Sanders’s policy proposals likely align with number of black voters, his ability to address race is limited to the scope of wealth and the economy. But black voters and organizers need to know why they should fight for Bernie Sanders’ vision of our economic future when our humanity is in constant peril.”

Last month at a Netroots Nation forum in Phoenix, a number of people in the crowd to listen to a Sanders interview about immigration disrupted it by shouting at him that black lives matter.

After the Seattle disruption, Sanders—who later spoke in front of an estimated crowd of 12,000 at the University of Washington’s basketball arena—released a statement on his website that read, “I am disappointed that two people disrupted a rally attended by thousands at which I was invited to speak about fighting to protect Social Security and Medicare. I was especially disappointed because on criminal justice reform and the need to fight racism there is no other candidate for president who will fight harder than me.”

Said Black Lives Matter Seattle, via Politico: “The problem with Sanders, and with white Seattle progressives in general, is that they are utterly and totally useless (when not outright harmful) in terms of the fight for Black lives. While we are drowning in their liberal rhetoric, we have yet to see them support Black grassroots movements or take on any measure of risk and responsibility for ending the tyranny of white supremacy.”