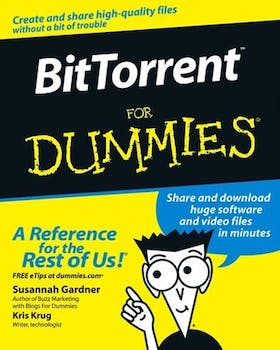 Irony for Dummies is the latest release by John Wiley & Sons.

“BitTorrent and data and the Internet yearn to be free. I would love to see everyone download BitTorrent for Dummies!”

There’s a word for that.

The BitTorrent book itself is not one included in the actions, which were first filed in October 2011. “Oh darn! I wish that it had!” Krug told the Daily Dot when we reached him by phone. He was wryly amused by the lawsuit and the entire Dummies concept that has made Wiley such a powerhouse. “It makes them look completely ridiculous and underscores their lack of understanding. That someone has to self-identify as a dummy to be their customer … it’s not a great brand. If you can’t figure out BitTorrent in five minutes by yourself and you buy my book, really there’s not much hope for you.”

John Wiley & Sons is one of the most successful publishers in the world, having virtually cornered the market on the how-to beginnersphere. The publisher’s attorney, William Dunnegan, told Torrentfreak: “Our intention is to stop the infringement and let individuals know that they are violating the law and depriving the creators of the works of rightful compensation. Our preference is to educate, settle, and prevent further infringement.” In other words, they’re not out to ruin people’s lives with a public jury trial and millions of dollars in damages, but they are out to privately ID individuals, get a settlement ($7,000 is the sum generally settled for), and make sure there are no repeat offenders.

Wiley and its lawyers made an exception for four New Yorkers, who are being sued directly in a jury trial and could face up to $150,000 each in fines. The record suggests that Jeff Ng, Ralph Mohr, Robert Carpenter, and Xiaoshu Chen, who were included as John Does in one of the mass lawsuits, did not comply with Wiley’s initial request to negotiate and settle, resulting in the subsequent identification and court action.

The numbers are impressive. Wiley claims Photoshop CS5 All-in-One-for Dummies alone was downloaded more than 74,000 times since June 2010. However, former Wiley employee James Harper raises the issue of publisher responsibility, and claims that the weakest link in the security chain is the publisher itself. In a comment on Publisher’s Weekly, he said:

“If you look at the metadata for most of the pirated books you’ll see that they’re coming from the publishers and their contractors (compositors, printers, PR, distributors, etc.) Publishers don’t protect their CMS well and their partners don’t either. If everything is trafficked on poorly secured FTP sites during production and printing, and dozens of people have access to the archived versions, it’s not a surprise when the files leak. The fact that many books are leaked before they’re printed also points to the source.”

This is equally typical in motion pictures, where the torrent is in effect a preview of the theatre experience, routinely coming out days, weeks, or even months ahead of the film.

BitTorrent for Dummies promises, “This book not only shows you how to acquire BitTorrent, but also how to use it without picking up worms, viruses, and lawsuits.” It’s not known whether any of the defendants had consulted this particular book prior to uploading.