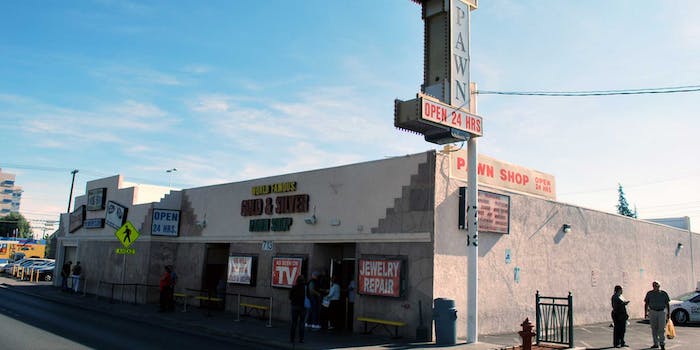 Need some quick cash? Soon, you’ll be able to pawn your bitcoins

You don't have to give your bitcoins up for good to turn them into cash.

To many, Bitcoin is the ideal currency. It’s global. It’s easy to transfer. And it’s value only seems to be increasing over time.

There only problem is, you still can’t pay your rent with it.

Yes. Even the most ardent Bitcoin backers still need a little cash-on-hand every once in a while to keep the lights on and put a roof over their head. But with the value of Bitcoin still rising (it’s gone from trading at less than $10  a Bitcoin in January to nearly $1,000 today), it can be difficult for investors to cash out now and forfeit the potential future value.

But soon, they may be able to convert their virtual cryptocurrency to cash without permanently bidding adieu to their bitcoins. From Wired today comes news of the world’s first Bitcoin pawn shop—where Bitcoin can be traded in for a short-term cash loan.

PawnCoin is still looking for financial backers before it gets up and running, but co-founder John Light knows first hand how valuable this service could be for Bitcoin holders. Light is an early adopter of the anonymous, decentralized currency, but when he needed some cash to cover his rent in March, he was forced to sell some of his Bitcoins. As Wired‘s Robert McMillan reports, Light quickly regretted the decision when the Bitcoins he sold for $30 a piece quickly rose $250 in value.

Teaming with San Francisco pawnbroker Carl Hilsz, PawnCoin works the same as any other pawn shop. In traditional pawn shops, customers bring in some sort of item (jewelry, electronics etc.) and use that as collateral for a short-term loan. The customer can reclaim their items by paying back the loan with interest before a specified deadline – otherwise the pawnbroker gets to keep the item and sell it.

In this scenario, Bitcoin would serve as collateral. The Bitcoin would be put into cold storage offline and customers would have a month to pay back the loan, plus 10 percent interest, in order to reclaim their Bitcoin. Important to note is that the customers only have to payback the value of their Bitcoins at the time of the initial trade. They don’t have to pay more if their Bitcoin rises in value while in storage.

As Hilsz and Light try to drum up support for their business, meeting with start-up incubators, they’re promoting PawnCoin as a way for Bitcoin holders to get value out of their digital currency without sacrificing the opportunity for even greater wealth down the line. But it should be noted though, a key component of the traditional pawn industry is customers not being able to pay back their loans. How Stuff Works says that 40 percent of traditional pawn loans go unpaid. That being said, Light said most of the interest in his service comes from Bitcoin investors who want to leverage the value of their current wallet to purchase even more Bitcoins.

Bitcoins aren’t ready to be pawned yet, but PawnCoin is allowing users to sign up for beta testing. Light and Hilsz hope to have the site up and running sometime this spring.