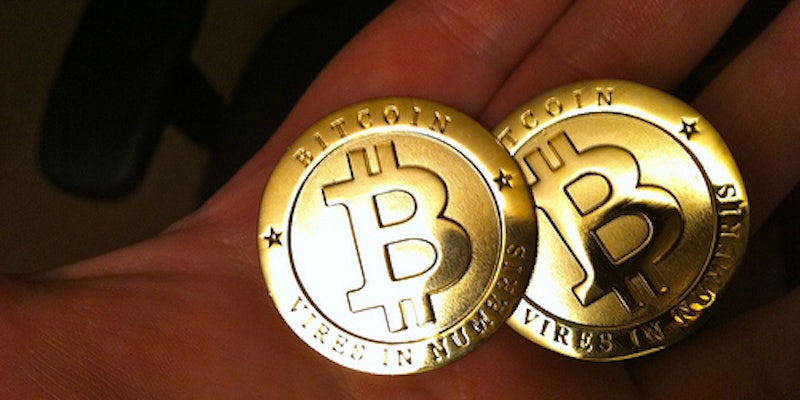 Bitcoin breaks $100: Is now the time to invest?

The digital crypto-currency Bitcoin broke the $100 exchange rate for the first time today.

The digital crypto-currency Bitcoin broke the $100 exchange rate for the first time today. The highest trade Monday was $105.90 and, at the time of the writing, rests at $102.49, according to Mt. Gox.

The Daily Dot has outlined elsewhere the “perfect storm” of forces that account for the latest surge in Bitcoin’s value. But an additional element may have had an effect in today’s record high.

Yesterday, the currency’s value hit $92, as IEEE Spectrum noted, giving all the bitcoins in circulation, taken together, a value that exceeded $1 billion for the first time. Bitcoin is looking slightly less like a fad or an accident waiting to happen, at least to some investors and users.

“As the price goes up, it costs more and more money for it to continue rising,” noted Charlie Shrem, CEO of BitInstant and vice chair of the Bitcoin Foundation.

“At the same time, it requires larger sell-offs for the price to drop, therefore as the price gets higher it stabilizes and becomes a lot less volatile. Due to this, I’m seeing more investors see Bitcoin as a better haven to keep their savings.”

Once relegated to the dark corners of the Internet, Bitcoin is a difficult-to-trace currency that is quickly gaining favor internationally, due in part to Spain’s economic freefall and Cyprus’s banking emergency. Although Bitcoin remains a “minor” currency in relationship to big fiat currencies like the dollar, the euro, and the pound, it’s significance is growing.

As Fox News remarked, it’s billion-dollar valuation raises it above a host of smaller national currencies. Bitcoin, as a currency, is now more valuable than the “stock of broad money” issued by the following countries, according to the Central Intelligence Agency’s World Factbook.

Any assertion that Bitcoin is as good or better than a fiat currency across the board is still difficult to convincingly assert. It is too new and too unprecedented. But it is increasingly difficult to dismiss out of hand any currency that is handily beating out nearly two dozen national currencies.