“Understanding how the body and the world around you works, being able to interact with that and learn more, we love that kind of stuff."

The independent research group Science for the Masses based out of Tehachapi, Calif. hypothesized they could essentially inject night vision into a healthy human eye using Chlorin e6 (Ce6), a type of chlorophyll analog used as a therapy agent in cancer treatment. According to research conducted by the group, the chemical had also been used as a means of treating night blindness.

“The eyedrop project was something that was mentioned to us after we had finished our NIR (near infrared) project about a year ago,” biochem researcher and team finance officer Gabriel Licina told the Daily Dot. “The NIR project was brutal, very difficult to do and with a low payout. Successful, but not something we would ever try again without better resources.”

After researching the project, the group of citizen scientists decided they had to try it out. Licina would serve as the project’s guinea pig.

Using a micropipette, the scientific equivalent of a turkey baster, 50 microliters of Ce6 were dripped on to Licina’s eyes. The chemical was absorbed to the retina and begin to take effect over the course of a couple hours. Licina would write on the Science for the Masses website that he had to wear protective lenses in his eyes along with sunglasses to deal with light sensitivity.

The biohackers had successfully completed the process of applying the Ce6, but would it produce the superhuman results they hoped for?

“Biology is really cool, you know?”

After waiting for Licina’s eyes to adjust to their newfound sensitivity, Science for the Masses tested their homebrewed night vision solution. Standing in a dark field along with four control testers who did not have their eyes manipulated by the Ce6, Licina and his standard visioned peers were asked to identify a variety of shapes, symbols, and people from 10, 25, and 50 meters away.

Those with normal eyesight correctly identified the objects with 33 percent accuracy. Licina never missed one—he had a 100 percent success rate.

According to the review paper posted by Science for the Masses, Licina’s eyesight returned to normal the next morning and after 20 days, he is without noticeable side effects. 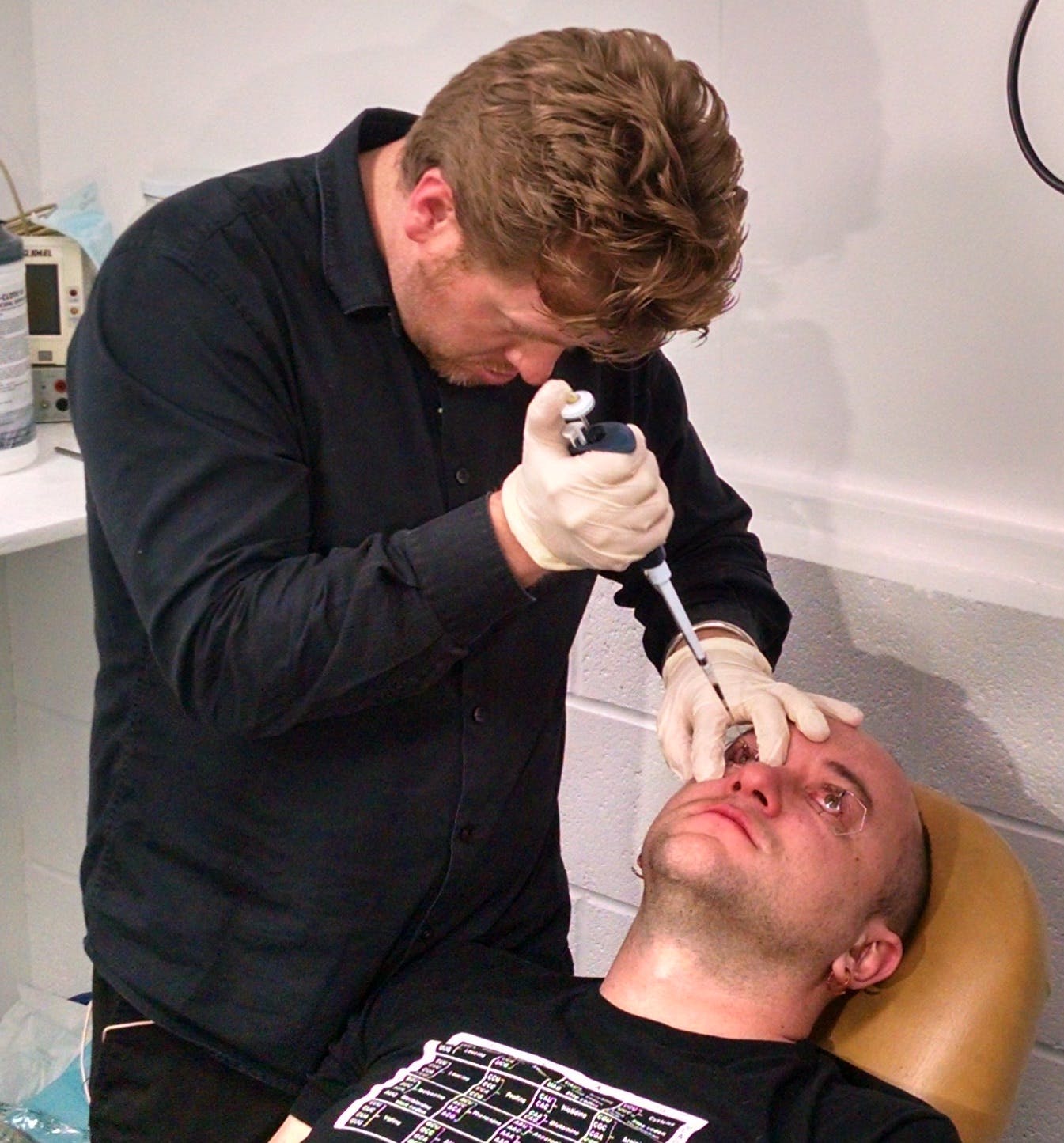 Science for the Masses

The results were impressive, but Licina said they’re just preliminary. “We definitely need to get some hard data from the electroretinograph, so that we can quantify the actual increase.”

Science for the Masses concludes their research by stating “further testing is need to confirm and measure the degree of improvement in health subjects,” and while there have been no adverse effects spotted in their subject, they note that more testing needs to occur “in order to measure the effects of this ce6 solution objectively.”

Why subject one’s self to this type of body modification? Licina had a simple answer: “Biology is really cool, you know?

“Understanding how the body and the world around you works, being able to interact with that and learn more, we love that kind of stuff,” Licina explained. He described it as a “really intimate type of technology.”

Of course, just like the misunderstood powers of fictional heroes, there are those who are uncomfortable with the work of Licina and his cohorts. Some have challenged just how safe the Ce6 solution used in the night vision experiment is, warning that use could lead to retinal damage.

Licina points out that the articles that warn against the use of Ce6 misconstrue much of the information put forth by Science for the Masses.

“What you’ll notice is that they mention Ce6 but when talking about dosage levels and risks, they mention a paper that references NPe6, a similar but different molecule. It’s like saying someone is allergic to peanuts and then pulling up a report on green beans because they’re all legumes, right?” Licina explained. “The work we cite states that the researchers injected 2mg/kg into the murine subjects. I put a much much smaller amount into my eye. Way less.”

Licina said the doctor behind the data that Science for the Masses based their experiment off of applauded their efforts to apply his research. The author of the dissenting article has spoken negatively of self-experimentation in the past, Licina explained, and viewed the night vision experiment as an opportunity to express his disdain. “Cherry picking your sources, confusing the references, and only listening to the ones who agree with you is the type of thing that science deniers do,” Licina said.

But just in case you’re thinking of trying this at home in hopes of becoming a low-rent super hero, you should still proceed with caution. Licina and his team spent six months in preparation for the project before starting testing. “Do your research,” he said. “Follow protocol. Always make sure you consider the risks. Only move forward when you feel confident. But make sure you learn enough about what you are doing that your confidence comes from somewhere.”

Even with the cautious optimism, we’re one step closer to seeing humans with super powers, no chemical spill needed.

Photo via Science for the Masses