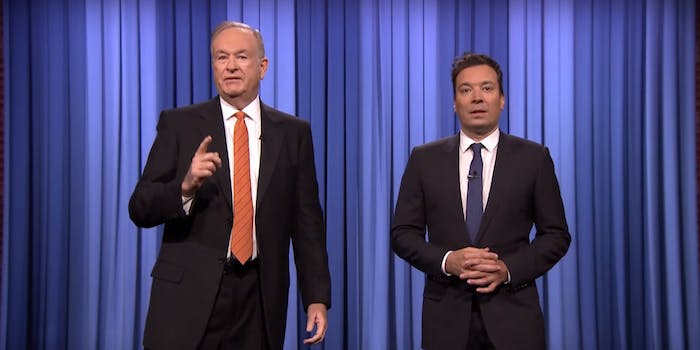 Bill O’Reilly has some simple debate demands for 2016 Republicans

We always like a good 'wrap it up' reminder.

The fallout from the third Republican debate continues, with the remaining 14 candidates mounting a fractured attempt to overhaul the debate system. But not every Republican is happy with the candidates’ new approach.

The attempt to set strict ground rules—including moderators “not asking hand-raising questions,” candidates approving on-screen graphics, and candidates not asking each other questions—didn’t even get a warm reception at Fox News, where several hosts said it was a bit ridiculous. Anchor Megyn Kelly brushed off the demands on her show, and on Tuesday night, top-rated anchor Bill O’Reilly took over The Tonight Show to respond with his own list of demands for the candidates.

With all these grievances, we have to wonder: Did Festivus come early this year?

But once you think about it, O’Reilly’s demands aren’t that outlandish. Even Jimmy Fallon can adhere to some of them.