When we say that Bill Gates drank some poop water and wrote about it in his blog, we might be underselling the importance of the moment.

“Really?” You may ask. “How much better can this story get?”

The answer? A lot better.

Not only is the water that comes out of this feces-burning machine “as good as any” that Gates has ever drank from a bottle, according to the man himself, but it could also help meet the sanitation and electricity needs of billions of the Earth’s inhabitants.

Gates’ blog post centered on his November visit to Janicki Bioenergy, the creators of the OmniProcessor, as part of the Gates Foundation’s quest to find alternative sanitation models to serve planet’s poorest inhabitants. The result of Janicki’s efforts could help lift people out of poverty while providing a safe means of turning waste into useful resources—most crucially, clean water.

The OmniProcessor works by first turning fecal matter into dry fuel that is burned at temperatures as high as 1000 degrees Celsius, hot enough to ensure that the process is odor-free. The heat generated in the fire is used to produce high-temperature, high-pressure steam that drives a generator, which in turn powers the processor and spits out additional electricity that can be delivered back to the community.

The byproducts of this process are clean, drinkable water and non-carcinogenic ash.

Gates estimates that over 2 billion people around the world either defecate out in the open or use latrines that don’t drain properly. These unhygienic activities contaminate water sources used by millions of people, killing some 700,000 children a year.

The Gates Foundation has funded many programs to find solutions to this problem, most notably through its Reinvent the Toilet Challenge. Janicki’s method, however, is unique in its holistic approach to waste disposal and in the potential breadth of its application. A single next-generation processor (not shown in the above video) is capable of processing the waste of 100,000 individuals, producing 86,000 liters of potable water, and generating 250 kilowatts of electricity. 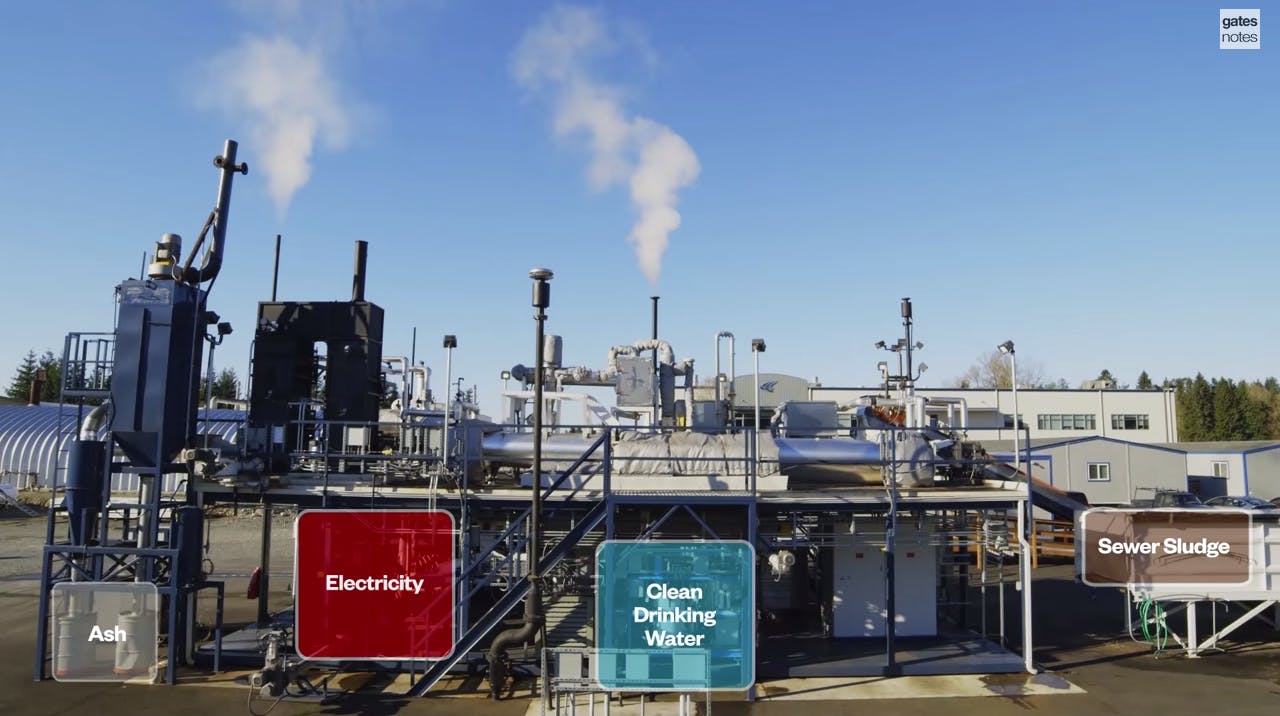 As great as it is, Janicki’s invention is still many years away from widespread adoption. The next step in the process is a pilot program in Dakar, Senegal, which will take place later this year. Janicki will lead the team on the ground there, helping to find a suitable location for the processor and building relationships with local residents and leaders there.

Eventually, Janicki and the Gates Foundation hope the processors can be the engines of self-sustaining businesses.

“Our goal is to make the processors cheap enough that entrepreneurs in low- and middle-income countries will want to invest in them and then start profitable waste-treatment businesses,” Gates writes in his blog.

This vision may yet be a long way off, but if Bill Gates believes in the OmniProcessor’s long-term viability, it could be a legitimate solution to some of the toughest challenges facing the developing world.