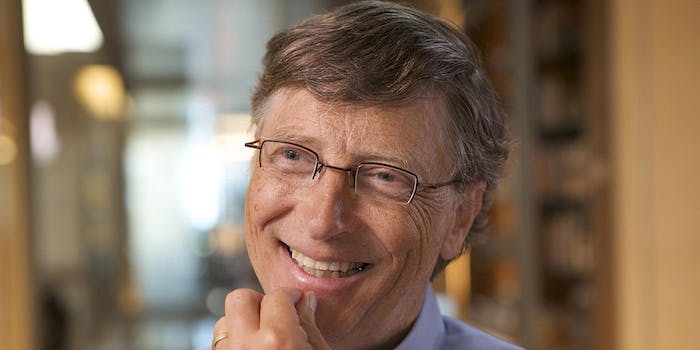 Gates is bullish on digital currency in the developing world.

A recent AMA (Ask Me Anything) session over on Reddit saw numerous users asking Microsoft founder Bill Gates what he thought of “cryptocurrencies like Bitcoin.”

“The foundation is involved in digital money,” Gates wrote, “but unlike Bitcoin it would not be anonymous digital money.”

Through the Bill and Melinda Gates Foundation, Gates is particularly impressed with the M-Pesa, a Kenyan digital currency that accounts for half of all monetary transactions in the country. The M-Pesa is supported by the country’s largest mobile network operators. Unlike Bitcoin, however, users must have a national ID card or passport to make deposits, withdrawals or transfers.

In 2011, Gates traveled to Kenya and first saw the digital currency in action there.

“M-PESA showed me a new world of possibility brought by that great piece of technology, the mobile phone,” he wrote. “A recent study found, among other things, that M-PESA allows users to maintain steady levels of consumption, particularly of food, through shocks such as job loss, illness, harvest failure, and livestock deaths.”

While in Kenya, Gates participated in a panel discussion about how to bring important financial services to every household in developing countries. The panel had an impressive roster: National and community-based banks as well as representatives of PayPal were involved. Most importantly, perhaps, was Kenya’s Safaricom, a leading mobile network provider involved with M-Pesa.

“Digital money has low transaction costs which is great for the poor because they need to do financial transactions with small amounts of money,” Gates continued. “Over the next 5 years I think digital money will catch on in India and parts of Africa and help the poorest a lot.”