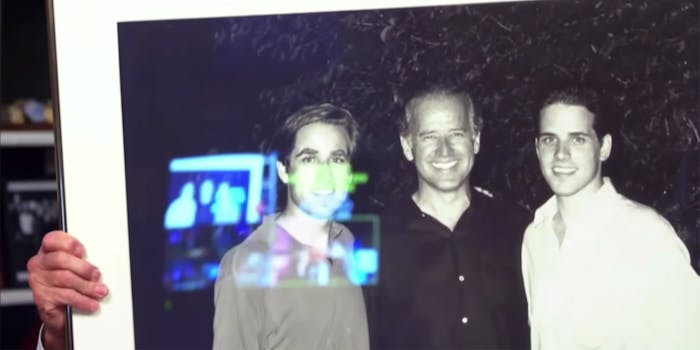 What is the Joe Biden teleprompter conspiracy theory tweeted by Trump?

Here's what we know for certain.

Over the past few months, after Vice President Joe Biden became the presumptive then official Democratic presidential nominee for the 2020 election, he’s faced numerous accusations over his mental acuity by President Donald Trump and his supporters.

And while they’ve gone after him in myriad ways, in the past month, their most popular argument is that Biden uses a teleprompter for his Zoom interviews, safely being able to script the responses from the comfort of his home.

In Kenosha, a woman at an event said that she was going to go off-script, implying that the Biden camp had given her an approved question to ask the candidate, which the campaign denies.

More recently, in a local interview, Biden said the phrase “top line messages” when discussing Venezuela, fomenting speculation that during the Q&A he had a teleprompter helping him along.

During an interview with Biden spokesman TJ Ducklo, Fox News’ Brett Baier asked directly about Biden’s use of a teleprompter, a question Ducklo did not address.

“I am not going to allow the Trump campaign to funnel their questions through Fox News and get me to respond to that,” Ducklo said.

This morning, Trump helped amplify the narrative, retweeting an old clip of Biden in an interview with talk show host James Corden.

The clip in question shows a reflection in front of Biden as he pulls out a framed photo of his children.

While the clip is old—and unclear if it’s a teleprompter or just other electronic equipment—Trump and his surrogates sharing it brought new life into the mini-controversy.

The accusation that Biden needs a teleprompter to get through interviews helps float several ideas beneficial to the Trump campaign. That Biden is in decline, and that a media that is anti-Trump is willing to participate in the charade, possibly sticking to questions sent in by the Biden camp. There is no proof of the latter accusation, but the president’s lumping of the media together with the Biden team helps fuel rampant, uninformed speculation.

The Biden campaign did not respond immediately to the Daily Dot’s request for comment.