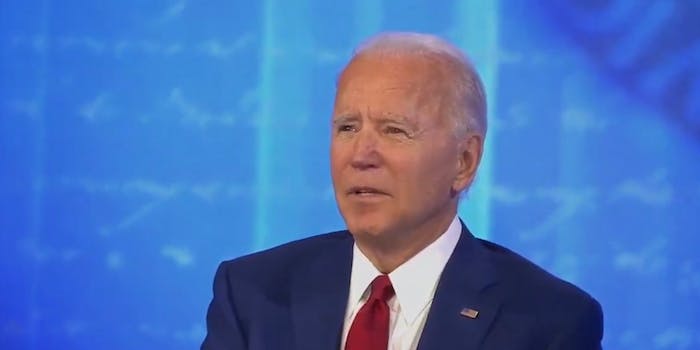 ‘Shoot them in the leg’: Biden has some police reform ideas at town hall

'Bruh, that's not how that works.'

Former Vice President Joe Biden suggested that cops should shoot people “in the leg” when discussing police reform at his town hall on Thursday night.

On the topic of criminal justice, Biden listed police reforms he would oversee as president. He said police should undergo more training and add social workers to their departments. He also said that police should shoot perpetrators in the leg, rather than killing them.

“You have to teach people how to de-escalate circumstances, de-escalate. So instead of anybody coming at you, and the first thing you do is shoot to kill, you shoot them in the leg,” Biden said.

The response came after Biden was asked about the 1994 crime bill, which increased federal sentencing disproportionately for minorities.

In his long-winded response, Biden said “shoot them in the leg.”

People online did not let the statement go unheard.

“Joe ‘just shoot them in the leg’ Biden Bruh, that’s not how that works,” one person tweeted.

“Talking about police reform, biden stresses the need for better training in de-escalation, says: ‘So, instead of anybody coming at you, and the first thing you do is shoot to kill, you shoot them in the leg!’ i promise you this is a real quote,” another person tweeted.

“Biden’s idea of de-escalation includes ‘shoot them in the leg.’ I wish it was an Onion headline,” someone said.

In addition to shooting people in the leg, Biden suggested other police reforms, like receiving more training before officers can get their badges.

Biden also said background checks and psychological tests should be administered for all police officers. In addition, he wants social workers and psychologists to be added to police departments to deal with cases involving people who are suffering from mental health issues.

At the town hall, Biden also said he would not be interested in defunded the police.